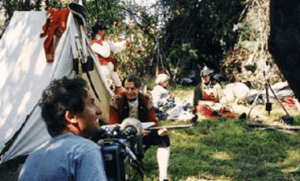 When most people think about the Battles of Saratoga, they think of those at Freeman’s Farm (Sept. 19) and Bemus Heights (Oct. 7). Also well known is the siege period in the modern Schuylerville area from October 10th to the 17th.

There were many combat actions however, both great and small, that get less notice. One small skirmish, occurred at Jones Mill, near Grangerville in the town of Saratoga on October 2, 1777.

A party of 100 to 150 men from the 1st and 4th Massachusetts Regiment from General Glover’s Brigade were operating behind the British lines. They moved from the village of Saratoga (now Schuylerville) on the Hudson River, toward the west, along Fish Creek in the direction of Saratoga Lake.

A participant in the incident, Sergeant Ebenezer Wild of the 1st Massachusetts, described what happened:

“we started at daylight… came to a mill called Jones… where there (are) a number of houses pretty close around it. We set fire to the mill and several other buildings and a large quantity of grain and took 7 prisoners here. We were discovered by a party of the enemy on the other side of the river, which caused us to leave the place quicker than we should otherwise have done. Notwithstanding, we took a considerable booty, and proceeded on our way home as fast as we could conveniently. We arrived at headquarters between 8 & nine o’clock in the evening with 10 prisoners, 3 of which were commissioned officers, and 12 horses and 18 horned cattle…what was very remarkable we never exchanged a shot the whole scout.”

Jones, the loyalist who owned the mill, was with British General Burgoyne’s army. The mill was operating under the direction of the British, supplying grain to their army. The Massachusetts men’s patrol captured seven prisoners and set to fire the structures including the mill and grain.

A British patrol from a unit named the Select Marksmen under the command of Captain Alexander Frazier might have seen the smoke from the burning structures. The Select Marksmen, guided to the location by Jones, observed the Americans pillaging and burning the mill from across Fish Creek without firing a shot. Jones crossed the creek alone to observe the damage to his property and was promptly captured. The American scouting party continued with their prisoners to the safety of their camp at Bemus Heights.

The “Incident at Jones Mills” is representative of the activities of the two armies near Saratoga in fall 1777. The first skirmishes happened when Burgoyne crossed the Hudson River on September 13th and ended with the cessation of combat between the armies on October 14th as the surrender or convention terms were being negotiated.

The victory at Saratoga in 1777 is called the turning point of the American War of Independence. This timely victory reversed American military fortunes, boosted patriot morale, and gained them international recognition and support, including military assistance from France.

(Much of this research was done by the late historian Stephen G. Strach (1949-2005). Strach had a distinguished career with the National Park Service and wrote numerous manuscripts on Saratoga and military history.)