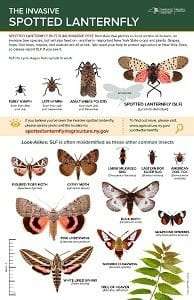 The spotted lanternfly (SLF) is a pesky invasive pest that feeds on lots of important New York plants, such as apple trees and hop vines.

With the recent finding of spotted lanternfly (SLF) on Staten Island, it’s never been more important for people to be on the lookout for this invasive. Since SLF spreads primarily through human activity, we really can make a difference.

When you’re keeping a watchful eye, know that SLF can be confused with other common insects you might spot flying around this fall. This time of year, the eastern boxelder bug or even gypsy moth eggs may catch your eye. DEC’s new SLF poster is here to help, with photos of SLF as well as some common look-alikes. 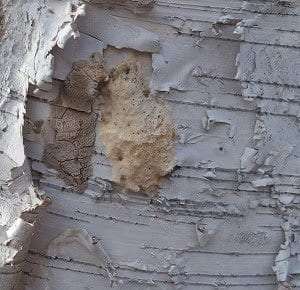 With high rates of gypsy moth infestation in New York this year, you’re more likely to see their eggs than SLF eggs but that doesn’t mean you shouldn’t be on the lookout. If you find an egg mass remember, spotted lanternfly eggs look a bit like mud that has dried and cracked. You can find SLF eggs just about anywhere including on firewood, trees, or even cars. Gypsy moth eggs, on the other hand, are lighter in color and fuzzy in texture. You’ll spot gypsy moth eggs on trees, firewood, or piles of rocks, but not on household items like SLF egg masses.