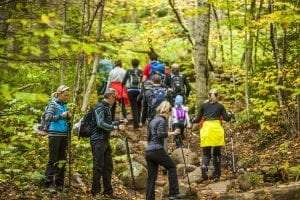 A Siena College Research Institute poll of New York voters in September showed that by 68% to 22% they want New York State officials to protect overused public lands in the Adirondack Forest Preserve from further abuse by enforcing resource capacity limits, rather than building bigger and bigger parking lots to accommodate the surging crowds.

To some extent, the Governor and the State have acknowledged the overuse problem, expanded education and public information efforts, and appointed a Wilderness Overuse Task Force. The Center for National Center for Leave No Trace has issued recommendations that include testing hiker permits.

“As we conclude the busiest time of the year on the trails and summits of the Adirondack Park, it is time for the state to follow the science and take heed of the public’s desire to protect the state’s most sensitive landscape from being loved to death,” Adirondack Council Executive Director William C. Janeway said in announcement of the the results of the Siena survey. “Like the hikers we surveyed in 2018, registered voters told Siena pollsters that they wanted park managers to ‘prioritize the preservation of the area and limit the total number of hikers allowed on any particular day.’

“The world class Adirondack Park is big enough for further growth in visitation if world class protections, education and management are funded and implemented,” Janeway said. “Limits on use must be coupled with expanded education, more forest rangers and other staff, and other infrastructure improvements, and can take many forms, including parking reservations, temporary trail closures, shuttle systems, trail passes and others.”

The poll’s participants were broadly representative of the state’s overall voter population, with 48% Democrats, 21% Republicans and 26% independent/other. About 41% of those polled lived in New York City, while 34% live upstate and 25% live in the suburbs.

Statewide, more than two-thirds (68%) of all voters said they would prefer limits on use, with only 22% supporting building bigger parking areas and trails, and 10% voicing no opinion. Those identifying themselves as liberal (77%) were more likely to support limits than those considering themselves conservatives (58%), with moderates in the middle at a solid two-thirds (66%).

Democrats and Independents had equal levels of support for capacity limits, at 71%, with Republicans also supporting limits by a margin of 56% to 36%, with 7% undecided.

Support for limits on use was two-thirds or higher in all regions of the state, with New York City residents coming it at 65%, suburban residents at 69% and upstate at 69%. Support was strong among all ethnic groups (65 to 77%). Youth showed the strongest concern at 75% (18 to 34 years old), with 55+ coming second at 67%. Levels of support didn’t vary at all among religious faiths (65%) or income brackets (68%).

Siena College Research Institute conducted the poll between August 30 and September 3, 2020. There were 795 New York State registered voters polled. The poll has a margin of error of +/- 3.7%.

“As people come to enjoy the fall colors and the last of the warm weather this season, crowds are likely to continue breaking records, while also breaking down the least durable and resilient features of the High Peaks Wilderness Area’s trails and summits,” Janeway said. “It is not right to just ask people to stay away from the High Peaks. We need all of the tools in the toolbox to fix this problem. Setting limits on use at some locations at some times, while expanding access in other locations, is one of the most important strategies because it can allow growth in total use while better preserving the access to Wilderness for everyone.”

In the 2018 survey, hikers favored wilderness protection over accommodating unlimited recreation by a margin of 70 percent to 20 percent. This was a survey of more than 1,000 High Peaks area groups of hikers conducted by the Adirondack Council, with Colgate University’s Upstate Institute. In both surveys there is a vocal minority of around 20% that prioritizes recreational access over wilderness preservation. Minorities represented close to 12% of this sample, and strongly supported preservation over accommodation of increased use.