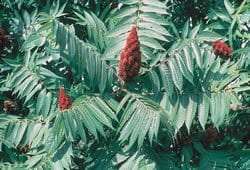 Each fall there is roughly the same amount of yellow foliage, since in most woody plants Mother Nature sees fit to cache yellow pigments beneath the overpowering verdancy of chlorophyll.

While yellow is a stable commodity in the forest, red is a different story. Trees go through considerable effort to create the assortment of red pigments known to nerds as anthocyanins, so it’s not like red is just hanging around, having a beer with yellow as they wait for chlorophyll to fade. It’s a bit more complicated, which makes it less unreliable.

Several factors play into the year-to-year vermillion variation. Anthocyanins take a lot of energy to synthesize, and if trees are drought-stressed, or caught a bad case of tent caterpillars in the spring, they don’t always feel up to this optional display. Weather also plays a part in seeing red: sunny days and cool – but not freezing – nights bring this colour out more than prolonged overcast conditions.

Although it might not look like it on a sunny fall drive over hill and dale, very few tree and shrub species make anthocyanins. Exactly why some plants pack their foliage with this expensive UV-blocking pigment just before they jettison said leaves is a bit up for debate, but it’s a sight that most of the planet never gets to see. In addition to our region of North America, only northern China and Japan, and some smaller pockets of Earth here and there, are treated to such a rich fall palette.

One can buy cultivars of sugar and soft (red) maples selected for their fall colours, and juneberry (serviceberry, Saskatoon, etc.) shrubs are showy as well. However, I think our native, near-omnipresent staghorn sumacs (Rhus typhinia) deserve an A-plus for their performance every year. They always manage a heartening display no matter how crummy their season was. In the best of circumstances they treat us to a breathtaking, in-your-face, neon-red-orange burst of colour.

Some consider this large shrub (12’-16’ tall at maturity) a “weed tree.” Its reputation as a nuisance has merit, as it can spread by means of its root system, sending up shoots far from the parent plant and creating thickets in pastures. Worse yet for character defamation, a few people mistakenly believe sumac is dangerous, given that it shares a last name with poison sumac (Toxicodendron vernix). That’s the unfortunate thing about distant relatives. Both species are in the extended cashew family, but staghorn sumac is not closely related to its toxic namesake. Or at least that’s what it would like you to think.

Happily, it’s easy to tell poison sumac from the good kind. First of all, the bad seed is a swamp-thing, an obligate wetland plant. It requires saturated, very often flooded, soils, so if you’re ankle-deep in water you may find Toxicodendron vernix, but Rhus typhinia could not survive there. Poison sumac has glossy leaves and stems, and bears loose bunches of somewhat drooping berries that turn whitish when mature. Plus, it never got the recipe for anthocyanin – perhaps because of the above-mentioned family tensions – and thus its leaves turn monochrome yellow before they drop. 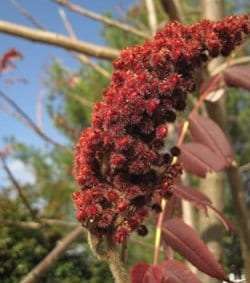 “Good” or staghorn sumac, on the other hand, proudly holds aloft its tight clusters of red berries. And it has reason to be proud, as you’ll see below. Everything about this plant is fuzzy – primarily its twigs, but the leaf surfaces and stems have fine hairs as well. Even the berries have fuzz. It grows just about anywhere, except in wetlands, and in autumn, its vibrant red leaves are a giveaway.

Some of the above information has been slightly deceptive, for which I apologise. I had aimed for very deceptive, but got tired. It turns out staghorn sumac shouldn’t get all the attention here. While it’s by far the most common sumac in our region, there are at least fifteen species of wonderfully benign sumac native to North America. The best general rule, I think, is to eliminate poison sumac, and any other kind is good. Unless maybe if it’s taking over your pasture.

Beyond the anti-depressive effects of sumac’s autumn spectacle, there are other reasons to espouse (figuratively, and where legal of course) this plant. It’s delicious, for one thing. The zesty stuff that makes apples mouth-watering is called malic acid, and sumac berries are loaded with this water-soluble compound. In southern California there’s actually a species called lemonade sumac (Rhus integrifolia). Drinking “sumac-ade” goes back a long ways. To make it, all you need is a clean plastic bucket full of sumac berry bunches (don’t pick the berries individually).

Fill the bucket with cold (never hot, or all you’ll taste will be tannins) water, and agitate the berries a few minutes by hand. Then strain the whole mess through a clean cloth to keep fuzz out of your drink. This gives you a very sour, very pink beverage. Sweeten it to taste, and there you go. Consider freezing some for later, too.

If you find a sumac bush without berries, don’t panic. Sumac is dioecious, meaning female (in this case berries) parts reside on separate plants from the male sumacs, which hang back and don’t help at all with berry production once they’ve shed pollen.

Sumacs are also cool because migrant songbirds depend on accessible food such as sumac berries if they arrive to a snow-covered breeding ground. Do a quick online search and you’ll see there are many sumac cultivars sold for home landscape use.

Sumac berries lose some (but by no means all) of their flavour by springtime, so the very next time sumac’s bright red fall “flag” catches your eye, stop if you’re able to collect some berries for a refreshing all-natural drink. It’s revitalizing in so many ways – ade for what ails us.