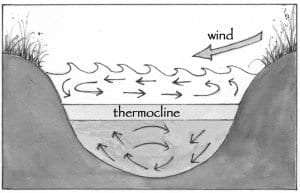 As I waded in Lake Champlain one summer, a fellow bather explained that just a little farther out, refreshing spring water would cool my feet. I have heard that old wives’ tale repeated at Lake Arrowhead in the Pennsylvania Poconos, and in Lough Ree in the Irish midlands.

The explanation of colder, deeper water is simpler, however, than coincidentally occurring springs. And as the seasons change, the same explanation turns the lake world upside down.

Textbook diagrams of summer lakes show warm water layered on top of cold, with a thermocline – or transition zone of rapidly cooling water – between the two, which many scuba divers can confirm. During a scuba dive into an Ohio quarry, our instructor took us down about 20 feet to experience the thermocline firsthand. We followed an anchor line until we felt cold water up to our hips, while our torsos remained in distinctly warmer water.

If diving is not your thing, you can demonstrate lake layering using food coloring and glass jars. Fill one jar with cold water and food coloring; I like blue for cold. Fill the second jar from your hot water tap and add red food coloring. Cover the warm jar with an index card and carefully flip it upside down on top of the cold water jar, then slide the card out. The cooler denser water will remain in the bottom jar and the warmer, less dense water will sit politely on top for quite some time. 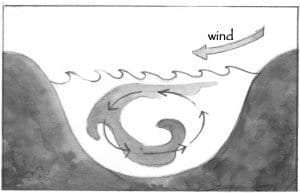 As seasons change, sun-warmed water that spent summer on top of a lake or pond cools gradually, and just as gradually gets denser. Eventually, the water on top is as dense as, or denser than, the water below. Once that point is reached, the surface water sinks and mixes with the underlying water in a process called “lake turnover.” Sometimes the cold wintery winds deliver the final push to turn a stratified fall lake to a well-mixed winter lake.

The University of Vermont’s research vessel captain, Steve Cluett, measured lake temperatures last October, providing an illustration of how lake turnover happens. On October 1, the temperature from the surface down to about 50 feet cooled from 62 to 61 degrees. As Steve’s thermometer sank to 80 feet below the lake’s surface, the water cooled quickly to about 54 degrees. From there, the lake cooled slowly, measuring 51 degrees at a depth of 125 feet.

An 11-degree difference between surface and 125 feet deep confirmed a lake still in layer-cake mode: warm surface, cooler deep, with a rapid transition in between. This status quo continued for the next several days. But a closer look at the numbers revealed changes afoot: the temperature difference between shallow and deep was shrinking.

By October 10, the difference between the surface and depth temperatures was 7 degrees, and by October 20, it was just 5 degrees. On October 22, the surface was just 2 degrees warmer than the deepest reading, and the zone of rapid temperature change had disappeared; the lake had turned over. The surface water by then was about 54 degrees; cold enough to give even the hardiest swimmer pause. 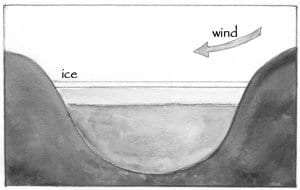 Lake turnover is more than just a curiosity for scuba divers. The process transfers nutrients – essential to the health and growth of plankton and aquatic plants – to the surface. Meanwhile, turnover delivers oxygen to depth, where it is needed by deep-water-dwelling species such as lake trout.

And so, as you paddle or swim in the last warm waters of fall, remember singer Sam Cooke’s words: “A change is gonna come.” In the case of lake-surface temperatures, the change can come rapidly, so don’t be caught off guard by a chilly surprise that came up from the deep.

Declan McCabe teaches biology at Saint Michael’s College. His work with student researchers on insect communities is funded by Vermont EPSCoR’s Grant NSF EPS Award #1556770 from the National Science Foundation. The illustration for this column is by Adelaide Murphy Tyrol. The Outside Story is assigned and edited by Northern Woodlands magazine and sponsored by the Wellborn Ecology Fund of the New Hampshire Charitable Foundation.