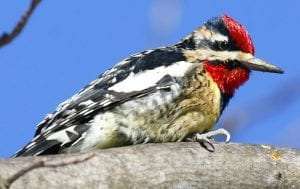 As far as I can tell, icebreaker exercises are meant to help those awkward obligatory group events like staff development days or office team retreats feel even less comfortable. I recall one workplace training where we had to inform the group what animal best represented our personality. I was going to say “squirrel” but got distracted looking at something out the window, and forgot. In retrospect I should have chosen the yellow-bellied sapsucker (Sphyrapicus varius), since I spent much of that same event straightening business cards and brochures at the conference center. This will make sense (I hope) in a moment.

Some may raise an eyebrow when they learn that “yellow-bellied sapsucker” is not just an epithet hurled by children across school playgrounds. Indeed it is a woodpecker whose nesting grounds encompass parts of the Great Lakes and New England states, as well as a broad swath of southern Canada. The real surprise is that this creature displays a behavior I would call compulsive.

To be clear, Obsessive-Compulsive Disorder is a challenge for some folks, myself included, so I’m not equating it to the sapsucker’s habits. But when I see the way this bird pecks perfectly straight rows of uniform-sized, evenly spaced shallow holes called sap wells, it reminds me a lot of squaring-off stacks of stationery. Unfortunately, this bird’s obsession sometimes injures or kills trees.

For all the harm it can cause, the yellow-bellied sapsucker is rather small, weighing a mere two ounces. On average it measures about eight inches long, with a wingspan around fourteen inches. It resembles two of our resident native woodpeckers, the downy and hairy, and is a bit larger than the downy, and a tad smaller than hairy.

Ironically, the yellow-belly is only yellow – and a very pale hue at that – at the center of its abdomen; otherwise its front is mottled (or barred) dark brown and white. It sports a black bib, and has a white stripe down its side, with black above. Of course as anyone who has seen the cartoon character Woody Woodpecker knows, it has a red head. Well, the males do, but females always have at least a red crown.

Sapsuckers feed on many trees: pine, hemlock, maple, and poplar are all on their menu, but they’re especially fond of thin-barked species like birch, mountain-ash and alder. Apple trees also seem quite attractive to them.

Although this bird’s existence may not hinge on having a laser-straight, regimented drilling pattern, sapsuckers don’t make sap wells for fun. The name suggests they have a means of vacuuming out tree sap but really, sapsuckers return to feed on sugar-rich dried (or concentrated) sap which collects in the wells it made earlier. In addition, they snap up insects which are attracted to the fresh wounds. Fruits and nuts round out their diet.

Much of the time, sapsuckers aren’t a problem for trees, as they frequently shop around, pecking a short line or two into one, maybe hammering out a paragraph on another trunk or branch. But occasionally the sapsucker will finish a row around the entire circumference of a particular tree, and then drop down a fraction of an inch (truthfully I don’t know what units they use) to begin the next, and on and on.

This ring-around-the-rosy performance chips out most of the cambium layer in that particular row of sap wells, disrupting the vascular system. It’s akin to girdling perhaps 70 or 80 percent of the trunk in that narrow band. Obviously this stresses the tree, and may eventually kill it. Why sapsuckers peck mercilessly on certain trees yet barely touch others of the same kind is not fully known, but I’ve noticed that very often it is a tree already struggling with stress – which includes any tree surrounded by lawn – that gets the bulk of their attention.

My current (untested) hypothesis has to do with the way trees protect themselves from things intent on eating them. A vigorous, vital tree is able to produce noxious compounds at feeding sites in an effort to repel insects, and presumably anything else dining upon it. A tree in a weakened state, however, cannot mount such a defense and is thus “tastier.” We know that in general, insect pests go for stressed and dying trees first. I’m going out on a limb to suggest this is why sapsuckers peck the life out of a landscape tree while ignoring the same species in a nearby wooded setting.

Sadly, the yellow-bellied sapsucker is considered a species of “high climate vulnerability.” The Audubon Society projects that if current warming trends continue, it could lose up to 88% of its current range. The breadth of its nesting habitat will shrink considerably in the south, without being able to expand nearly as much to the north. So let’s be nice to sapsuckers even if they do cause a problem for one of your trees. If that’s the case, wrap the section of trunk under “attack” with burlap, or aluminum window screen. And then make sure it’s getting enough water, and that nobody drives on, or adds soil to, its root zone (twice the branch length). A little bird is telling you the poor tree is stressed-out.