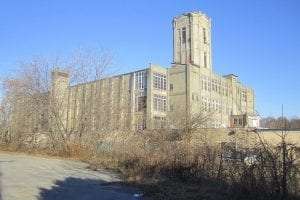 Private developers are planning for the clean-up and reuse of the historic Victory Mills complex located on Fish Creek in the Village of Victory, Saratoga County.

Developers are working to turn the 1918 cotton mill into 186 apartments and a brewpub at a cost of about $60 million.

The site was home to textile factories from 1846 to 1929. The village and mills are named for the American victory at the Battles of Saratoga, a turning point of the American Revolution (the Postal Service uses the name Victory Mills). The Saratoga Battle Monument of 1883 is within the Village and the General Phillip Schuyler House, Marshall House, and the Saratoga National Historical Park and National Cemetery are nearby.

In 1846 “The Saratoga Victory Manufacturing Company” built a three-story cotton cloth factory costing $425,000. Erection of the mill coincided with the Potato Famine in Ireland and many Irish immigrants found work in the mill. The Village of Victory was incorporated in 1849 and in 1850, the cotton mill employed 160 men, 209 women, working at 12,500 spindles and 309 looms and produced nearly 2 million yards of cotton cloth. 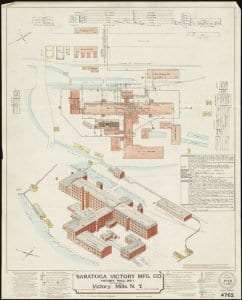 By 1877, the company had expanded considerably, employing some 700, with 26,000 spindles and an annual production of 819,988 pounds, or almost 4.5 million yards. The complex included the pickers house; the main mill building for spinning carding and weaving; cloth and starch rooms; a large dye house and two store houses. Additional buildings were scattered around the property, including a paint shop, cement house, carpenters and blacksmiths shops, boiler house and company offices. The whole complex was powered by Fish Creek.

The existing five-story brick and reinforced concrete mill building was built in 1918 by the American Manufacturing Company. It has six towers, five encase stairways while the sixth contains a water tower. It processed cotton until 1928, when its operations were moved to Guntersville, Alabama. 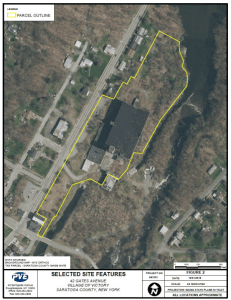 In 1937, the complex was purchased by the United Board and Carton Corporation. A.L. Garber / Wheelabrator-Frye operated the factory from 1972 to 1977, then Clevepak Corporation, who manufactured folding pharmaceutical and food cartons until 1983. In that year Victory Specialty Packaging Company began making cartons there. In 2000 the operations in the building ended, and it has remained vacant since. It was added to the National Register of Historic Places in 2010.

A 22-acre parcel across Gates Road to the north, now called Victory Woods, was donated to the Saratoga National Historic Park by the mill owners in the 1970s, but could not be developed until 2005 when the park secured a management plan and necessary funding. The park moved ahead with archeological and landscape assessments however.

During archeology work artifacts were found from 5-8,000 years ago, but remains from the 1777 British Army’s occupation of the site had been lost to looters over the years.

The loss of this archeological record was significant, although archival documents from the period were researched resulting in a series of exhibit panels that paint a picture of the final days of the British Army in Victory Woods. Trails opened there in 2009.

The proposed mill site on Fish Creek redevelopment includes a Brownfield Cleanup Program project. NYSDEC in consultation with NYSDOH has made a determination that while the site is contaminated, it does not pose a significant threat to public health or the environment. DEC is accepting written comments about the proposed clean-up plan, called a “Draft Remedial Action Work Plan (RAWP)” through December 5, 2020. You can access the RAWP and other project documents online through the DECinfo Locator.