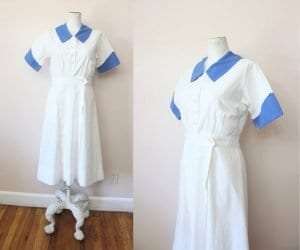 The nurse’s cap, which was a de rigeur part of the nurse’s uniforms up until the end of the 20th century, evolved from a nun’s wimple, the traditional head covering. The larger caps had a practical purpose in keeping the hair in place, but by the First World War, the caps had shrunk to almost decorative purposes. By mid-century they were more a symbol of accomplishment and nursing pride. Capping ceremonies were held to commemorate the completion of a nurse’s studies. By the 1970s, they were almost totally out of favor, and largely not required. Today, bouffant caps or surgeon’s caps have replaced them, when needed.

During the Crimean War, Florence Nightingale, a mother of modern nursing, instituted a standard uniform for working nurses consisting of a long dress, with a protective apron and a cap. Gloves and face masks were still a half-century in coming. 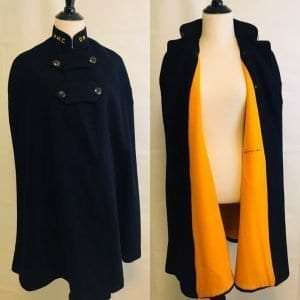 War has a tendency to spur medical innovation and change, and the Second World War was no exception. A wartime fabric shortage resulted in a trimmer, shorter nurse’s uniform. Viet Nam and the fashions of the 1970s brought us nurse’s white pantsuits and finally, the all-purpose scrubs took their place, beginning in the 1980s.

Shamron Mills in Troy, NY, has been a textile and garment-making powerhouse for a century and a half. In 1886, E.W. Marvin joined the firm of Gunnison & Son. Like many of Troy’s textile factories, Gunnison produced collars and cuffs, specifically ladies’ linen collars and cuffs. By 1908, the company was known as E.W. Marvin & Co. 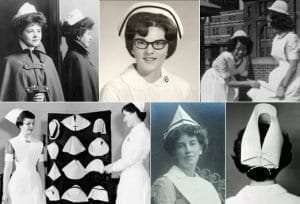 n 1917, Raymond P. Neitzel became part of the company. Although they already made detachable collars and cuffs for nurses, they wanted to introduce an entire line of nursing wear. Neitzel brought his experience to the company and became a partner. The company became the Marvin Neitzel Corporation in 1931. They moved from 5th Avenue and Fulton Street to 444 River Street in 1974, and were the last company in Troy to still produce collars and cuffs.

The company remained at this location sewing nurse’s uniforms until finally closing in 2002. Marvin Neitzel was one of the largest manufacturers of nursing apparel in the United States. Many examples of their clothing are available on specialty vintage clothing sites. Their nurses’ woolen capes, first made during World War II, are especially fine.

Photos, from above: 1930s Marvin Neitzel nurse’s uniform, 1940s/WW2 nurse’s cape and label via Etsy. A collection of nurse’s caps via ameritech.edu.