What really happened at Donnelly’s Corners in the spring of 1929?

The question haunts the exciting and thought-provoking novel, The Power Line (Outskirts Press, 2020) by Christopher Shaw.

According to Shaw, the project began in the seventies when the guide and regional historian Abel St. Martin began recording the memories of older people around Saranac Lake and Lake Aurora in the Adirondacks.

In the course of those interviews many in their eighties referred obliquely to a shoot-out between bootleggers where the roads to Lake Clear and Paul Smiths meet, overlooking the Bloomingdale Bog, and with views of Whiteface, McKenzie, and the High Peaks. But none of them knew any details.

That’s when St. Martin’s longtime companion Sonja Germaine said old-timer Lonnie Monroe, who grew up in Lake Aurora, knew all about it, and about her grandfather, Fran Germaine, the noted fiddler and rustic builder. “Talk to Lonnie,” she told him.

Monroe’s account follows his and Germaine’s numerous adventures working for Paul Smith’s Electric Company and the gangster Legs Diamond, to Mexico, Montreal, and their thrilling escape by canoe across the St. Lawrence River in the dead of winter. It also chronicles the atmosphere and struggle of doctors and patients when the surrounding villages were havens for tuberculosis sufferers from all over the world. 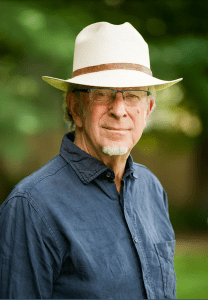 Tapes and transcriptions left behind when St. Martin disappeared in the Amazon in the late eighties constitute the bulk of the book, but publication was stalled until the appearance recently of corroborating journals by the original owner of Lake Aurora’s Eagle Point camp, the political writer and reputed lover of Carl Jung, Rosalyn Orloff.

Orloff attended Radcliffe where she was a student of William James and knew Gertrude Stein. She knew and employed Fran Germaine after the climactic shootout. Her story comprises the novel’s second half and provides glimpses of an intellectual Adirondacks rarely seen in print, including appearances by James, Bob Marshall, and Rockwell Kent. They shed light not only on a little known period of Germaine’s biography, but known stream of influence in the Adirondack story and its centrality to American philosophy, psychology, art, and environmentalism.

Christopher Shaw was a guide and caretaker before editing Adirondack Life in the nineteen eighties. His book Sacred Monkey River: A Canoe Trip With the Gods, was published by W.W. Norton in 2000. He taught Creative Writing at Middlebury College for twenty years.

The book is available in paper or hardcover, or in ebooks on Kindle, Nook, and Apple iBook, at www.cshaw.net.