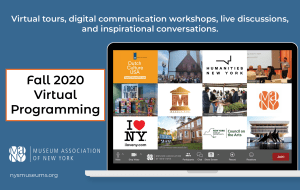 This fall, the Museum Association of New York is presenting virtual programming to keep museum professionals connected to their colleagues and help grow their expertise.

Programs with Humanities NY and Museum Hue will help participants grow digital communications expertise and learn about ways museums are working with their communities to address urgent needs exacerbated by the national health and economic crises.

All programs are free unless otherwise indicated with advance registration required.

Virtual Tour: Ten Broeck Mansion on Monday, October 19th at noon. The Ten Broeck Mansion in Albany was built in 1798 for Brigadier General Abraham Ten Broeck and his wife, Elizabeth Van Rensselaer. This tour will provide a glimpse into their life in Albany and will include an exploration of documents and objects related to the period.

Virtual Programming: Making Meaningful Connections on Friday, October 23rd at noon. In the second of three programs focused on digital communications Nicholas MacDonald and guests will look at current models for online programming, strategies for planning events, how to make the experience more engaging, and the necessity of partnerships for a successful event.

Virtual Tour: New York State Education Building Tour, on Monday, November 9th at noon. The New York State Education Building was completed in 1912 and was the first major governmental building constructed exclusively for educational purposes. It originally housed both the NYS Library and the NYS Museum. Designed by architect Henry Hornsbostel, it is an example of Beaux-Arts style architecture notable for its massive colonnade. Important interior features include the 94-foot-high rotunda, barrel-vaulted glass skylights, and the Guastavino tile vaulted ceilings. This tour is an opportunity to see inside one of the most magnificent buildings in Albany and will conclude with a short discussion about developing guided tours.

Virtual Tour and Discussion: Schuyler Mansion State Historic Site: Exploring Multiple Perspectives, on Monday, November 16th at noon. This tour of Schuyler Mansion State Historic Site will highlight unique approaches to help bring more voices to the history of the site. Tour will begin at the 1917 Visitor Center, where the installation tells the story of six individuals who lived at, worked at, or visited the Schuyler’s home in the 18th century. In the mansion, Heidi Hill will illuminate practices and programs that have helped pioneer a multiple perspectives narrative and discuss a new tour: Say Their Names: Rediscovering the Enslaved Men, Women and Children of Schuyler Mansion.

MANY Special Event: Albany Ale Tasting, on Thursday, November 19th at 6 pm. Enjoy a tasting from Fort Orange Brewing while Historian Craig Gravina and Discover Albany’s Maeve McEneny guide you through 400 years of brewing culture in Albany all from the comfort of your couch. Ticket price includes four 16oz craft beers shipped to you by Fort Orange Brewing. Admission is $45 for MANY members, and $55 for the general public.

Digital Communications: More Than Marketing, on Friday, November 20th at noon. In the final of three virtual Meetups, join Nicholas MacDonald, Communications Manager at Humanities New York, and guests who will look at the changing landscape of communication, best practices, and evaluation.

Virtual Tour: Erie Canal’s Locks and Infrastructure, on Monday, November 23rd at noon. Experience a guided tour with William Sweitzer, Director of Marketing for NYS Canal Corporation and Duncan Hay, Historian, Erie Canalway National Heritage Corridor of the New York State Canal System’s locks and infrastructure at the junction of the Erie and Champlain Canals and the Mohawk and Hudson Rivers in Waterford. Five locks and a series of guard gates help the Erie Canal bypass the Cohoes Falls on the Mohawk River. Erie Canalway National Heritage Corridor’s historian, Duncan Hay, will provide a narrated tour of this National Historic Landmark system.

Virtual Tour and Discussion: Innovations in Museum Practice: Behind the Scenes at the Tang Teaching Museum, on Monday, December 7th at noon. This tour and a discussion at The Tang Teaching Museum at Skidmore College, a leading academic museum and well-regarded participant in national investigations of contemporary art, education, and cultural concerns, will feature highlights of the Museum’s 16,500-object collection and gain insights about the Tang’s innovative practices.

For information about MANY’s virtual programming can be found on their website, or by calling (518) 273-3400.