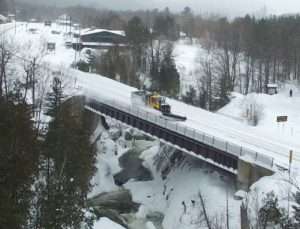 Local Government leaders are calling on Gov. Andrew Cuomo to sign into law a bi-partisan bill that would establish an Adirondack Road Salt Reduction Task Force and Pilot Program.

“We all recognize the vital importance of safe drinking water and of protecting our streams, lakes and ponds from the pollution introduced by the excess use of salt on our roads. This legislation provides for a pilot program to seek alternative solutions to that excess use,” said Ronald Moore, Chairman of the Adirondack Park Local Government Review Board.

Lake George Mayor, Robert Blais said, “We have been working for years to safeguard Lake George from salt contamination and we are starting to see some very promising results in terms of salt reduction and also substantial cost savings. I encourage the Governor to take what we have learned and apply it across the park to help save all of the other pristine Adirondack Lakes and, of course, to protect drinking water.”

Gerald Delaney, Sr., Executive Director of the Adirondack Park Local Government Review Board and Town Councilman, Town of Saranac, NY, had this to say, “We have a track-side seat at a slow moving train wreck. The decades old practice of using salt is coming home to roost. Aquifers are contaminated by salt beyond use. The number of wells impacted are growing every year. Now is not the time for blame, we all benefited from clear roads. I call on the Governor Coumo to do what he does best. Manage a crisis with science and good decision making skills. Show the rest of the country New York is a leader. This will be a crisis if we don’t act.”

The approved Act was named in honor of Randy Preston, former town supervisor in Wilmington and Chairman of the Essex County Board of Supervisors, who died of brain cancer in 2019 and had pushed for a drastic reduction in road salt use in the Adirondack Park. The Act creates a task force and pilot program to ensure that safe passage is provided for the travelling public and clean drinking water is preserved for homeowners.

Roy Holzer, the current Supervisor of the Town of Wilmington, was among the first of about 30 local government leaders to sign-on to urge Gov. Andrew Cuomo to sign the bill into law. “It is often the people with limited resources who are having their wells contaminated with road salt and they struggle to afford to drill a new well and replace all of their pipes and appliances. Local efforts can only go so far, we need state leadership on this issue. With the right plan and commitment, we can ensure our waters are protected while ensuring the safety of citizens on our winter roads.”

The bill, if signed by Gov. Andrew Cuomo, would help to address growing concerns about groundwater and surface water contamination by road salt. The Task Force would make recommendations that would be incorporated into an Adirondack Park-Wide pilot program to reduce salt use across the region while maintaining safe roads and protecting drinking water.

Photo of salt truck on bridge provided by AdkAction.