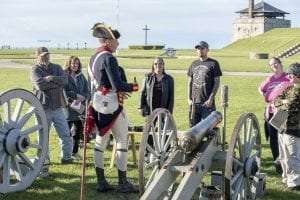 Old Fort Niagara is set to host a Living History Weekend on Saturday and Sunday of Columbus Day Weekend, October 10th and 11th. The fort’s staff and volunteers will present a variety of 18th century living history activities for visitors to enjoy from 10 am to 4 pm.

Cooks will be preparing recipes from the 18th century or earlier. Learn about soldiers’ rations and how they were prepared. Attendees can learn the difference between officers and enlisted soldiers meals, what was involved in preparing an 18th century meal, and how soldiers augments their diets by hunting, fishing and gardening.

Resident blacksmith will fire up the forge and demonstrate how iron tools and furnishings were made using a bellows, hammer and anvil.

Reenactors will explore the lives of engagees (known as voyageurs) who paddled canoes on the Great Lakes carrying European made goods west and furs harvested by Native Americans east. Fall was the time when voyageurs returned from the upper country with their harvest of beaver, otter, martin and other pelts.

A silversmithing demonstration will show how jewelry and other silver products that were great demand among Native Americans were made.

An 18th century laundry demonstration will look at the laborious task of laundry, from building the fire to heat the water, to carrying the water, to washing and drying the clothes.

Popular military music from the 18th century will be played throughout the day, as well as fifes and drums, which regulated the soldiers’ day and also entertained the troops.

Old Fort Niagara is located at 102 Morrow Plaza, Youngstown. More information can be found on their website.