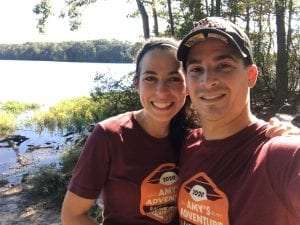 The Lake George Land Conservancy (LGLC) hosted its 4th Annual Amy’s Adventure Race for the Lake this year on the weekend of October 1st.

Due to COVID-19, the race was held “virtually,” meaning that runners could choose to run the usual race route at the LGLC’s Amy’s Park in Bolton Landing or run 4.5 miles at a location of their choice.

This year’s race included 72 competitors, the most of any race year, including 53 first timers and 19 returning runners. While most ran locally at Amy’s Park, 24 participated in other locations, including Colorado, Maine, Virginia, Pennsylvania, New Jersey and other parts of New York State.

The overall winner, Volker Burkowski, was also the defending 2018 and 2019 champion, finishing the race in 40 minutes and 9 seconds. The female winner, also a defending champion, was Kaley Bell, a fourth time Amy’s Racer, who finished in 42 minutes and 9 seconds. The remaining top finishers were Matt Haley, Brian Dillenbeck, Sarah Haley and Donna Hamilton, who all finished the 4.5-mile rugged trail race in under 54 minutes.

Created to bring attention to the LGLC’s mission of protecting the land that protects Lake George, race organizers also hope it directly demonstrates the holistic benefits of conserving natural resources while also providing recreational opportunities. The event was spearheaded in 2017 by the LGLC’s Next Generation (NextGen) Committee, a group of young professionals committed to bringing awareness to LGLC’s mission by organizing innovative events geared towards engaging communities around the lake.

While many racers return year after year, the race sees many new runners each year, eager to take on the challenge and support the LGLC’s mission. Over its 4-year tenure the race has grossed over $17,000 for LGLC programs, while bringing awareness to the special nature of the Amy’s Park, the importance of the Indian Brook area and the exciting Bolton Hub Recreational Initiative.

“Amy’s Race is always a fun and engaging fall event, with a wonderful community feel and lots of new and familiar faces that have made the race an annual tradition,” said LGLC Community Engagement and Events Manager Michele Vidarte. “This year, while we really missed seeing all the Amy’s racers in person out at the Park, we had a tremendous showing on social media; you could still feel the energy from the event through our runners shared photos and stories. This made us realize that we could still have a meaningful, community event without actually being together, something that we will continue to do in future years so that even more people, near and far, can participate in this fun, unique race.”

This year’s race proceeds, which grossed just under $5,000, will all go to the Bradley’s Lookout acquisition, part of the Bolton Recreational Hub plan, for which the Committee has raised over $11,000 since 2019.

Photos from the event as well as the complete list of competitors and their times can be seen on the LGLC’s page on Facebook, @HikeLakeGeorge.

More information about the Lake George Land Conservancy can be found on their website.