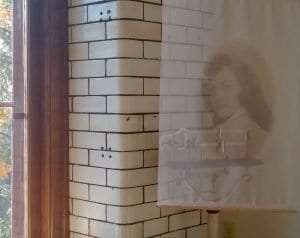 October is a good month for a ghost story. So here is the tale of a humble spirit who for years haunted a cure cottage up on Charles Street in Saranac Lake.

I heard this story from Eileen Black, who has lived in the house for many years and raised her family there. A ghost visited their home several times a year for decades. He would show up at the back walkway, walking towards the house, glancing in the windows. Well-dressed, in an elegant, old fashioned coat and fedora, he looked a bit like Fred Astaire, so the family named him, “Fred.” Eileen, her husband, and children all got used to Fred sightings. He would appear and then be gone, before they could get a good look at him. Guests at the house would see him too. They were never afraid of him; he felt like a friend.

Fred’s visits went on for years until the time when the family decided to do a major renovation to the back area of the house. One day, when the construction was just about finished, Eileen looked out the back window to see Fred walking down the path, away from the house. He glanced over his shoulder, and he was gone. It was the only time they had ever seen him walking away, and it was the last time they would see him. 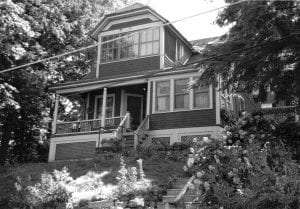 That is the whole story. It’s pretty short and not very scary, but it is a first-hand account from a family who lived in the company of a ghost. At 168 Charles Street, some part of the past lived side-by-side with the present.

We tend to believe that apparitions grow out of violent occurrences, and that they are people with unfinished business. I looked up Eileen’s house on the Historic Saranac Lake Wiki, and discovered that the first owner of the house, Arthur Strough, died in a tragic car accident. Arthur and his friend Joseph LaBeau died in April 1922 on nearby Bloomingdale Road near the Trudeau Sanatorium. The vehicle went off the road, and Arthur burned to death under the car.

Perhaps Arthur’s painful and untimely death helps to explain the haunting of Charles Street. Yet here in Saranac Lake where death was no stranger, you would think we would have more stories of hauntings. Any one of our old cure cottages could be haunted by people who died early deaths, but it seems they are mostly quiet.

Phantoms may be uncommon, but if you pay attention to the past, it will come alive. At the our museum, our exhibit on the fresh air cure features personal stories of several TB patients. Their faces hang in the room on semi-transparent banners. One of our exhibit ghosts is Gloria Hazard. She came to Saranac Lake as a teenager, in search of a cure for TB. In an effort to save her from aggressive TB infection, her doctors resorted to thoracoplasty, a drastic operation where ribs were removed to permanently collapse the diseased lung. Gloria died of surgical complications on July 4, 1948, when she was only nineteen. 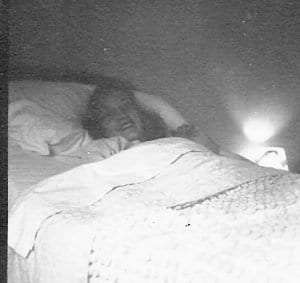 Until her death, from her bed at Trudeau, Gloria wrote letters home almost daily. Her niece visited the Saranac Laboratory Museum several years ago and shared the letters with us. When we listen to Gloria’s story, we learn lessons about sorrow, perseverance, and love. We might briefly grasp the reality that our time on earth is miraculous and fleeting.

We invite Gloria to haunt our museum as a simple act of human decency, to pay witness to a life that came before us. As we work to expand the museum into the Trudeau building, we are making room for more ghosts. Visitors will listen to stories of TB patients like Gloria, wilderness guides, shopkeepers, great camp builders, and Native Americans who made their homes here for thousands of years.

Here in Saranac Lake, we love our phantoms and the old buildings they call home. Some towns might have chosen to tear down the Trudeau house and put up a CVS. But instead, we are bringing the place back and finding our way forward together, by looking into the shadows and listening to our ghosts.