Nicolas Martiau was one of a number of refugees who made their way to America (Virginia) via England. A surveyor and engineer in the service of Henry Hastings, 5th Earl of Huntington, he was an ancestor of George Washington.

In 1660, Jacques Cortelyou completed his “Picture of the City of Amsterdam in New Netherland,” providing a view of Lower Manhattan’s layout. Around 1667, legendary Amsterdam cartographer Joan Blaeu bound Cortelyou’s survey together with other depictions of New Amsterdam into an atlas. 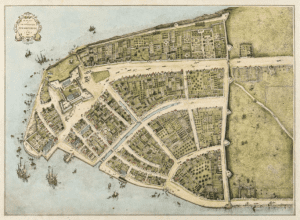 In the winter of 1667/8 Cosimo III de’ Medici, Grand Duke of Tuscany, visited the Netherlands with the specific intent of meeting Blaeu. Having acquired the atlas, the New Netherland map was added to the splendid collection at Villa di Castello, the Medici country residence in the Florentine hills. There, Cortelyou’s survey was re-discovered in 1900. It carries the name “Castello Plan.”

Having founded their first church in the mid-1550s at a private home in Paris, French Calvinists adopted the Huguenot name around 1560. When in January 1562 the Edict of St Germain recognized a (limited) right to practice their religion, there were an estimated two million Huguenots in France.

Tolerance did not last long.

Hostilities lasted until April 1598 when Henry IV signed the Edict of Nantes which granted religious freedom to the Huguenots. Erosion of their privileges gathered speed in the 1680s after Louis XIV’s morganatic marriage to Madame de Maintenon. His revocation of the Edict in 1685 led to more than two hundred thousand Huguenots fleeing the country, including skilled craftsmen such as instrument makers, silversmiths, and jewelers. There were also artists, financiers, and soldiers. These réfugiés introduced the use of that word into the English language.

The departure of the Huguenots was a disaster for France, costing the nation much of its cultural and economic influence. In some cities, the mass exodus meant losing half the working population.

The Treaty of Tordesillas of June 1494 declared that lands lying beyond the Atlantic Ocean, whether discovered in the past or the future, were to be shared uniquely between Spain and Portugal – to which Pope Alexander VI gave his approval in a papal bull. Soon after, the Spanish refused to allow any other nation to trade with their American colonies. 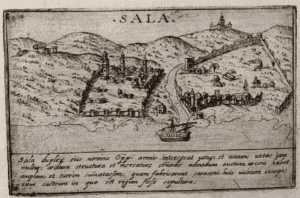 This measure heralded the beginning of the risky but profitable venture of privateering by which France and England allowed the attack on (richly loaded) Spanish vessels in Europe and the West Indies. Normandy was a center of seafaring and the heartland of French Protestantism. During the period of religious wars, large numbers of Huguenot sailors became privateers (and some, pirates) to take part in the war against Catholic Spain. Privateering helped finance the Protestant cause in France itself.

The Spanish retaliated fiercely, fearing the arrival of Huguenots in their New World colonies. In 1564, when a group of Norman refugees settled in the St Johns River area of modern-day Florida, they were slaughtered by troops sent by Philip II of Spain as religious invaders. When they captured French corsairs, Spanish authorities would treat them as heretics. They were sent to gallows.

The European ports St Malo, Le Havre, Dieppe, Honfleur, or La Rochelle were associated with privateering for several centuries. Their sailors, mostly engaged in cod fishing, would use any available opportunity to attack and loot Spanish ships in daring engagements. They often teamed with Protestant privateers from the Low Countries. Known as “Watergeuzen” (Sea Beggars), these corsairs served the Prince of Orange in the war against Philip II, and operated from La Rochelle.

In 1572/3, Huguenot corsair Guillaume Le Testut joined forces with Francis Drake, attacking a Spanish convoy bringing gold and silver from Peru. The former was a member of the Dieppe School of Cartography. Early maritime map making and piracy were inseparable and Dieppe’s charts showed a detailed knowledge of coastlines.

Amsterdam, Europe’s central commercial hub of the seventeenth century, became prominent in the production of maps for an international market. Small but bustling ports such as Enkhuizen or Edam produced their own caert-schrijvers (map-scribes) who specialized in charts for practical use. Their work dealt with the day-to-day navigation of European coastlines or the Indian and Atlantic Oceans.

Huguenot refugees brought cartographic expertise to their host countries. In 1746, Jean [Jonn] Rocque produced a ground-breaking “Plan of the Cities of London and Westminster.” The most significant population of exiles ended up in Amsterdam or elsewhere in the Netherlands where mapmakers found opportunities for furthering their skills. Many stayed in the Low Countries, others moved on to England, South-Africa, or America.

Beginning in 1624, French religious refugees began to arrive in New York and New Jersey. By the time of the 1685 exodus, Huguenot communities sprang up in Massachusetts, Pennsylvania, Virginia, and South Carolina. Often, the new settlers assimilated with existing (Dutch) Protestant groups.

During the sixteenth century, privateers operating from the coast of North Africa were authorized to intercept Christian ships. They also raided the coasts of Valencia, Andalusia, Calabria, or Sicily, taking thousands of prisoners to be sold as slaves. At times, this led to opportunistic alliances whereby Dutch or French Protestant pirates coordinated attacks on enemy vessels with their Muslim rivals. 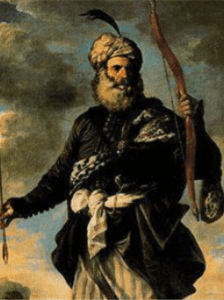 Anthony Janszoon van Salee was born in 1607 in Cartagena, Spain, the son of a Dutch pirate and a Moorish mother. His father is believed to be Jan Janszoon van Haarlem, who was captured in 1618 by Barbary corsairs and with other Salé Rovers declared the port of Salé (hence Salee, the port is now in Morocco) independent of the Sultan. The elder van Salee became the short-lived republic’s first President and Admiral, Murat Reis.

In 1630, younger Van Salee sailed to New Amsterdam as a colonist of the Dutch West India Company. Believed to be the first Muslim to settle in New Netherland, he was described in contemporary documents as a “mulatto” or “Turk” (the words were interchangeable at the time). An outspoken advocate for the rights of minorities, “Anthony the Turk” and his wife moved across the river in 1639 to be among the first settlers of Brooklyn at Utrecht (after the town of Breukelen in Utrecht province in The Netherlands).

In 1643, Anthony obtained the patent of a substantial acreage on western Long Island, most of which remained undeveloped for a decade or so. Since Coney Island (once called Conyne Eylandt) verged on his estate, it was long referred to as “Turk’s Island.” Nine years later, Cornelis van Werckhoven, a widower and a prominent figure in Utrecht politics, took his family to New Amsterdam where the West India Company granted him land that, previously, had been under Van Salee’s management.

Tutor to Van Werckhoven’s children was Jacques Cortelyou [Cortillon]. Born about 1625 in Utrecht, he descended from a family of Huguenot refugees. Having studied cartography and surveying at the city’s university, he accompanied the family to New Netherland. In 1654 his employer returned home, leaving Cortelyou in charge of his properties. Upon Cornelis’s death in 1655, Cortelyou was given permission by Governor Peter Stuyvesant to sell off twenty lots of vacant land in order to build a new settlement. New Utrecht was officially recognized as a village in 1657 and given its charter in 1661.

Jacques Cortelyou was subsequently appointed Surveyor-General of the province of New Netherland. His first task was to survey the land and produce a map of the settlement. 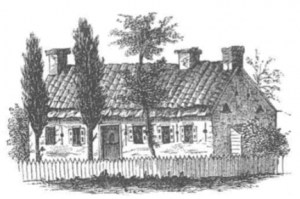 In 1660, he completed his “Afbeeldinge van de Stadt Amsterdam in Nieuw Neederlandt.” This “Picture of the City of Amsterdam in New Netherland” provides a view of the (muddy) layout of Lower Manhattan. The map shows Fort Amsterdam, the home of Peter Stuyvesant, the canal, and the wooden wall along the northern edge of the city (later Wall Street) that was built for protection. It represents New Amsterdam around the peak of Dutch settlement with a population of several thousand.

Nicasius de Sille had arrived in New Amsterdam from Arnhem, Gelderland, in 1653. The son of Walloon Huguenot refugees, he was the first person to purchase a lot from Cortelyou to settle in New Utrecht. He became First Councillor to Peter Stuyvesant. In 1660, at the behest of the East India Company, he completed a ‘List of the Inhabitants of New Amsterdam’, the names and addresses of which correspond to the houses drawn on the Castello Plan.

Maritime cartography had flourished in Dieppe and other pirate ports in Normandy. In exile, Huguenots brought their skills to the Netherlands where they were taught the latest scientific developments in map making. Descendants of these pioneers entered into Dutch colonial service. They literally put New York on the map.