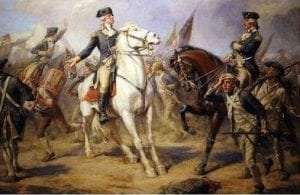 The Fraunces Tavern Museum has announced a virtual lecture by the author of George Washington’s Nemesis: The Outrageous Treason and Unfair Court-Martial of Major General Charles Lee during the Revolutionary War, Christian McBurney, set for Thursday, October 8th.

Christian McBurney is a partner in a Washington, DC, law firm. He is author of a number of books and articles on the Revlutionary War, including The Rhode Island Campaign: The First French and American Operation in the Revolutionary War (Westholme, 2011).

This lecture will begin at 6:30 pm, and will be held via Zoom. For more information or to register, visit the Fraunces Tavern Museum website. Registration ends at noon on Thursday.

Book Purchases made through this Amazon link support the New York Almanack‘s mission to report new publications relevant to New York State. If you found this post helpful, make a contribution at our Rally.org fundraising page.

Painting: Washington at the Battle of Monmouth by John Ward Dunsmore.