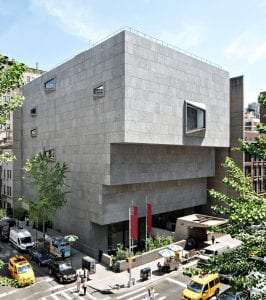 The Frick Collection has announced details of its two-year installation plan for Frick Madison, the institution’s temporary home while its historic buildings at 1 East 70th Street undergo renovation.

Anticipated to open in early 2021 and remain operating for the duration of construction, Frick Madison will occupy the Marcel Breuer designed building on Madison Avenue, formerly home to the Whitney Museum of American Art and most recently The Met Breuer.

For the first time, audiences will be able to view highlights from the collection outside the setting of the Frick’s Gilded Age mansion, only five blocks away. In a departure from the Frick’s customary presentation style, works will be organized chronologically and by region.

The exhibition will feature treasured paintings and sculptures by Bellini, Clodion, Gainsborough, Goya, Holbein, Houdon, Ingres, Piero della Francesca, Rembrandt, Titian, Turner, Velázquez, Vermeer, Whistler, and others, alongside holdings in the decorative arts. Rarely displayed works will include important sixteenth-century Mughal carpets and long-stored canvases from the famed series by Jean-Honoré Fragonard, to be shown together in its entirety for the first time in the Frick’s history.

The Frick Madison installation will be presented across three floors of the Breuer building, with paintings, sculptures, and decorative arts organized by time period, geographic region, and media. Highlighting strengths in particular schools and genres, the display will present the collection in galleries dedicated to Northern European, Italian, Spanish, British, and French art, setting the stage for rooms dedicated exclusively to works by individual artists, including Vermeer, Rembrandt, and Van Dyck.

At Frick Madison all fourteen paintings of Fragonard’s Progress of Love series will be displayed together for the first time in the Frick’s history, including three panels that have been in storage much of the time since Henry Clay Frick purchased the set for his home in 1915. The series will be displayed to reflect its history, as it was created during two distinct campaigns, twenty years apart. The initial four canvases (1771–72) will be shown in a gallery adjacent to a room that displays the later ten canvases (ca. 1790–91), a temporary arrangement that has never been possible in the Frick mansion.

The installation will focus renewed attention on less familiar areas of the collection, including two sixteenth-century Mughal carpets, one of which is an especially rare and remarkable example. Removed from the mansion’s domestic setting and thereby freed of the reminder of their practical function, these carpets will be hung on the walls like paintings, a display in keeping with their status as works of art of the highest quality.

In the same manner, the installation will feature display areas and rooms dedicated by medium to significant works of French furniture, Asian and European porcelain, Renaissance bronze figures, portrait medals, French enamels and important European clocks. This mode of presentation will offer fresh insights on the breadth of decorative arts acquired by Henry Clay Frick and subsequent acquisitions made by the museum’s Trustees.