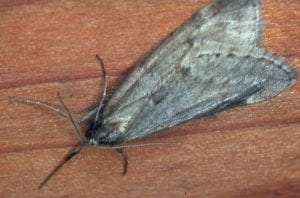 From the onset of November, periods of mild weather become fewer and further between; however, there are always occasions when hats and coats can be left in the closet, and the fire in the woodstove can be allowed to die out for a day or two.

It’s during such balmy spells when several species of hardy moths take to the air and can be seen after dusk fluttering around a porch light or a window next to a lamp. These small, drab gray insects are all closely related, belonging to the Geometridae family of animals, and are best typified by the fall cankerworm (Alsophila pometaria).

During the latter weeks of autumn, after one or several hard frosts, the adult fall cankerworm emerges from its pupa case situated in the layer of dead leaves covering the forest floor. The mature male supports 2 sets of wings that are covered with tiny, powdery scales, and which measure slightly over an inch across. Compared to its wings, the body of an adult is quite small, as this insect lacks all digestive organs during this brief phase of its life cycle. Because of its low body weight, the male cankerworm is able to fly with minimal effort and is able to rely on the nutrients previously stored in its body during its larval stage to fuel its bouts of flight. Also, the muscle tissue used to operate its wings have evolved the ability to function at temperatures that range from the mid 50’s down to the upper 30’s. This is in sharp contrast to the muscles of most flying insects which function best when their body temperature is 60 degrees or higher. 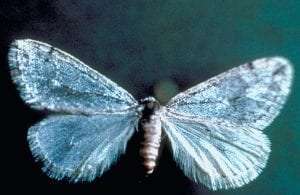 Unlike the male, the adult female fall cankerworm lacks wings. After she emerges from her cocoon, she uses her legs to climb a nearby tree to get well above the ground. Once she arrives at a suitable perch, her body emits certain chemicals designed to attract any males flying in the general vicinity. With no need to develop wings and organs associated with a digestive system during her final metamorphic transformation, most of the stored nutrients in her changing body can be channeled into egg formation.

After being fertilized, the female advances toward the end of a twig and deposits her eggs in a cluster of 100 or more. Because of the increased concentration of fats placed in each egg, these tiny embryos are better able to withstand the low temperatures and dry air than most other insect eggs. Shortly after breeding, both males and females die, like pacific salmon.

As the foliage starts to emerge from the buds on our deciduous trees in May, the eggs hatch, and small, emerald green larvae emerge and quickly begin to feast on the tender young leaves. Because each larvae can devour a significant amount of foliage during the one and a half month period when it is a hungry caterpillar, several successful clusters of eggs can have a serious impact on the number of leaves that a shade tree has as it goes into the summer.

In some areas of the country, this insect is viewed as a defoliating pest, and attempts have been made to control their population. In the years prior to the Civil War, some well intentioned naturalists introduced the English sparrow into New York City in an effort to reduce the impact of this cankerworm on the trees growing there. Since that time, the English sparrow has spread across the entire continent and is now among the most common of birds in urban and suburban communities.

After devouring leaves for 6 to 7 weeks, these inch long green, hairless caterpillars begin to descend to the forest floor on a thin silk thread. In summer, inch worms are often encountered by hikers in the wilderness, individuals that mow a lawn under a large deciduous tree, like a maple, cherry, ash or beech, or people that walk along a sidewalk beneath the shade of one of these common hardwoods.

Once on the forest floor, the fall cankerworm seeks out a sheltered spot where it can spin a cocoon and remain hidden from a foraging bird, shrew, wood frog, predatory bug, or other small insect-eating creature. While in this pupa state, the cankerworm changes into an adult, yet it does not emerge from this protective shell until cold weather has become well established for several weeks, and a hard frost has occurred. By waiting until the last weeks of autumn to emerge from its pupa case, the adult is able to move about without the threat of being attacked by a bat or bug-eating bird. However, enough adults are able to successfully reproduce to ensure that a healthy population emerges the following spring.

In New York State, the fall cankerworm is joined at this time of year on pleasant evenings by the Bruce spanworm, winter moth and several other species that have evolved a similar life history. Seeing a moth in late autumn after sunset, especially when the temperature remains in the upper 40’s for the night, is not unusual. If this insect is just over an inch across and is the same dull gray color as an overcast sky, it is probably a male cankerworm, spanworm, or some other hardy relative engaging in a ritual that has occurred for eons.