The slowing of the river as it passes through these lakes, over centuries and centuries, over thousands and thousands of years, since the last glacier, allows for great deposits of earth (sand, mud and muck) to build up on their lake floors.

There had always been a seasonal flooding problem along the Raquette River. Lumbermen had taken advantage of such flooding to float (drive) their logs to their downriver sawmills for years. In May of 1871, the then one-year-old Setting Pole crib dam, constructed by Potsdam area lumber interests, burst and sent a deluge of water down river causing extensive damage to the mill and factory towns (Colton, Hannawa Falls, Potsdam, Sissonville, Hewittville, Norwood, and Norfolk) all suffered extensive damage. But during the late summer and early fall theses same mill towns needed water to operate water wheels and turbines to provide power, and the river was often too low. Increasingly New York State found its self in need of river regulation, flood control in the spring, and more water storage for the dry season.

In the Fourth Annual Report of the State Water Supply Commission of New York, 1909 an extensive survey of New York’s rivers had been undertaken. The report outlined plans for the Hudson River, Sacandaga River, Schroon River, Genesee River, Delaware River and the Raquette River. In this and other reports New York State undertook comprehensive surveys of its rivers. The thinking of the day was to construct large containment dams to catch and control the early spring runoff, hold the water in large reservoirs, and then release the water when it was needed later in the summer and fall.

A survey of the Upper Raquette River was conducted in 1908. The report outlined plans for containment dams to be constructed at eleven (11) different sites. Dams and containment reservoirs were contemplated for Blue Mountain to Utowana Lakes, Raquette Lake, Forked Lake, Brandreth Lake, South Pond, Long Lake, Slim Pond, Little Tupper and Round Lake, Horseshoe Lake, Tupper Lake, and Dead Creek. Interestingly the Bog River, Hitchins Pond area was not included or mentioned in the surveys. Perhaps that was due to the fact that A. A. Low had already constructed his own Upper and Lower dams.

The Tupper Lake Reservoir was to be the largest of the proposed sites. The Tupper Lake site had been a huge glacial lake basin that could impound over ten billion cubic feet of water storage. The proposed 55-foot dam could easily raise the lake level by an average of thirty feet and back up water to create a huge reservoir. The impoundment would create a larger Tupper Lake and a much larger Simon Pond, it would also flood some 18-25 miles of the lowlands along the meandering Raquette River all the way to Raquette Falls.

The question that engineers and surveyors needed to answer was where should the dam be constructed? The first thought was to obtain the maximum storage capacity, and that would entail the building of a larger dam at Piercefield or Setting Pole. Both of these sites were proven to be socially and economically not feasible.

The second thought was to build a dam between Raquette Pond and Tupper Lake. The Water Commission Report of 1909 stated:

“. . . but for the immediate present we appear to be driven to the selection of the narrowest part of the strait which connects Big Tupper Lake with Raquette Pond.

“Except for a bold ledge outcrop on the east shore, this site had none of the special features looked for in a dam site. The wide bottom land was once a timbered flat, mostly above water, but when the reservoir dam was built (Setting Pole) it was flooded and has since become a stump-covered morass. . . . Surface indications gave no hope of finding rock bottom are (at) any reasonable depth, and the borings, to a depth of 90 to 100 feet, proved this surmise to be correct. Altogether a forbidding place for a dam site, which would have been immediately rejected if there had been any better alternative.”

The Water Commission Report went on further to state that there were two sites between Tupper Lake and Raquette Pond under consideration.

“ . . . Dam site No. 1 and Dam site No. 2. Dam site No. 1 covers the narrowest portion of the strait, just south of Raquette Pond, while No. 2 is located 3,000 feet south from the former where the strait is 1,000 feet wider, but has ledge outcrop on both banks. (black bars on attached map, labeled Dam #1 and Dam #2) Dam site No. 1 was finally chosen as the better of the two, since it was shorter, gave somewhat greater reservoir capacity, and had an equally good substratum for foundation, and a favorable site for a spillway to be founded on ledge.”

However the engineers and surveyors knew that this was not an especially good site. According to Louis Simmons, Franklin County Historical Review, 1989:

“. . . They chose for its site the narrowest point of the strait, extending from near the lower section of the present Rock Ridge housing development in uptown Tupper Lake across to the promontory on the west shore. The design called for digging a trench in the mud and silt (on) the river bottom, from the middle of which sheet piling in three tiers, bolted together, would from a water tight bulkhead, driven into the sand. The trench would then be filled with impervious and tightly packed soil, (and) further strengthened by a curtain wall of reinforced concrete rising to the top of the dam extending throughout its entire length. On that foundation and with a concrete core, the earth embankment was to be constructed, making a dam 55 feet high, 450 feet thick at the lowest point of the base, 220 feet at the water line, and 100 feet thick at the top. (The general increase in depth behind the dam would have been 33 feet.) A masonry spillway would be built on a solid rock foundation at the easterly end of the dam, and provisions made for the necessary gates and a log run, to accommodate the spring log drives down the Raquette River, still in progress in 1908 and for many years thereafter.” 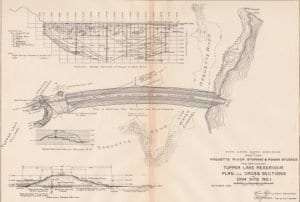 In the 1909 report the engineers planned that the Tupper Lake dam be unusually large due to the possibility of over-topping waves during extremely high spring floods, and a fear of leakage under the dam. “It has been fairly well documented by that the old lake bottom at this place is filled with a deposit of nearly impervious sand, grading at different strata, from superfine to fine.” As a result of not finding a solid rock base there was always a question of safety.

So, What happened ? Why was one of the largest proposed reservoirs in the Adirondacks not constructed?

Well, once again there was no clear-cut answer. Again, according to Louis Simmons and Bill Fernette, former Tupper Lake Historians, there were a number of factors.

Perhaps the most important reason was safety. The proposed dam could not be constructed on a solid rock base. The glacial lake bottom, with its 100 feet of deposition (sand, mud, and muck) was too unstable. The strait between Tupper Lake and Raquett Pond was a “forbidding place.”

But safety was not the only concern; there were also questions relating to the nature and value of the property to be flooded. The scenic beauty of the river and lake area would be impacted. The considerable fluctuation of the exposed shoreline could expose large mud flats in the late summer and fall. Some of the town of Tupper Lake and almost all of the village of Moody would be flooded. The reservoir would encroach on the large private preserves of Edward Litchfield of Tupper Lake, Titus Meigs of Follensby Pond, as well as other wealthy and influential property owners such as Col. William Barbour. 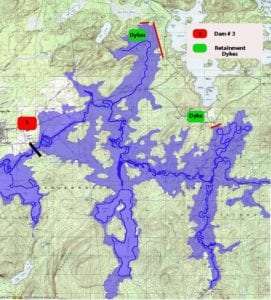 The proposed Tupper Lake Reservoir, Dam #1 would have also flooded a great deal of land along the banks of the Raquette River, viewed at the time as a “valueless swamp, covered with small brush and trees of worthless varieties common to wet land. . . ” all the way to Raquette Falls. This flooded area was the “magnificent lake” from the Oxbow, past Trombley’s Landing, Follensby Pond, Axton Landing, Stony Creek, to the base of Raquette Falls.

The idea of building a dam further upriver at the Oxbow was also part of the plan. (Plan “B” if you will) In fact the Oxbow Dam plan stayed in existence as a second generation plan until after 1916.

But, perhaps the greatest impact was a change in how dams were to be utilized. The growing need for electricity called for different types of dams at different locations. To produce hydroelectric power it was more feasible to locate the dam, and generators, at the points of most vertical drop. As the Raquette River tumbled off the Adirondack Plateau there were much better locations for power dams to be constructed. Eventually there would be 18 Hydropower-generating facilities along the course of the Raquette River. These smaller dams could store water and more efficiently generate power while assisting in regulating spring flooding. The large containment dam with its associated huge reservoir was no longer necessary.

Illustrations: Above, Rick Rosen’s Map with Piercefield, and Setting Pole Dams in yellow, and Dam sites #1 and #2, in red; middle, schematic drawing, Tupper Lake Reservoir Plan and Cross Section, Dam No. 1, 1909; and below, Rick Rosen’s Map of the Proposed Oxbow Dam 1909, 1916.