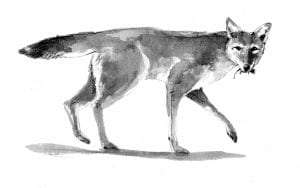 In 2011, my husband and I planted 128 fruit trees on a hillside, mostly apples, but the back few rows included stone fruits. Our apples began producing with gusto after only a few years. We made gallons of cider and sold bushels of heirloom apples. But the plums have required patience. Their blossoms are so delicate and our springs so unpredictable that after eight years, there were still varieties we had yet to taste.

Over the years, we have been loyal. We have not eaten anyone else’s plums. Then we were rewarded when all five of our small Stanley plum trees produced dark blue fruit. By the end of that September, they had almost ripened.

Then one morning, all the plums were gone. At base of the trees, I found torn and pierced skins, and barren pits. My later discovery of a long, tapered blue scat, found on a raised rock, confirmed my suspicion.

Eastern coyotes, I should have known, also like to eat plums. Canis latrans var. and I share a similar world view. I would have eaten all the plums too. Greedy, some might say, but I would describe it as opportunistic. Coyote researchers agree that coyotes are fluid when it comes to diet. They are true localvores, eating what is available, when it is available.

Fall is fat times for the coyote and the farmer. We are both busy preparing for winter. My family is stockpiling food. Our root cellar is full, the jam is put up, and dried peaches, like slivers of the sun, are secreted away until the dark of winter. The coyote’s cellar is its body. It is fueling up on the sugar from fall’s fruits, proteins from prey and fats from seeds and nuts. Its varied autumn diet prepares its muscles, flesh and even fur for the hard winter. Its ragged summer coat falls away and a thicker winter coat takes its place. With its long, coarse guard hairs and thick undercoat, the 30 to 50 pound canine assumes a much heftier appearance.

There is much for these generalized opportunists to eat in the fall, but it’s their frequent consumption of small rodents that lets me forgive them for eating my plums. In the earliest hours of an October morning, I saw this in action as I watched a lone coyote pause with ears tilted toward the ground. It leaped forward, thrusting its snout into a tangle of dead grass, and came back up with a small rodent gripped in its jaws. If you are a fruit farmer, a worse fate than a coyote stealing your plums, is a vole gnawing your trees.

Autumn nights can be filled with the howls and yips of the local coyote pack. In winter, this sound may dwindle. Male juveniles tend to leave in search of their own territories and mates, although young females will often stay with their parents for an additional year or two. These females will help to maintain the pack’s territory, hunt larger prey such as deer, and raise the next litter of pups.

Only once in twenty years of winter tracking did I ever come across a fresh coyote kill. A young deer, scattered and torn – fresh tracks laying out the tale of its final moments, pulled down by three coyotes. When I returned three days later, all that was left of the deer was a few ribs and one hoof.

Winter is hard on coyotes and clearly hard on deer. Evidence from many coyote studies conducted throughout the eastern United States, show that deer are the dominant winter food for coyotes, but it doesn’t follow that coyotes are the main reason for deer mortality. According to Will Staats, a New Hampshire Fish and Game regional wildlife biologist, most deer consumed in the winter by eastern coyotes are winterkill or roadkill.

As fall tips towards winter and the night grows quiet, I reflect on coyote and me. We have much in common. We eat what we can, when we can. My family lives large off our farm during harvest season. We eat like kings, or perhaps coyotes. We pack it on ahead of winter, and thicken our coats to endure the cold. If I could, I would grow my underfur too, and howl at the night sky as my own growing children begin to slip away to new terrain.

Susie Spikol Faber is Community Program Director for the Harris Center for Conservation Education in Hancock, New Hampshire. The illustration for this column was drawn by Adelaide Tyrol. The Outside Story is assigned and edited by Northern Woodlands magazine, and sponsored by the Wellborn Ecology Fund of New Hampshire Charitable Foundation.