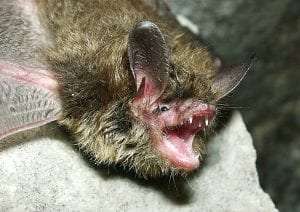 In observance of Bat Week, an internationally recognized week-long focus on raising awareness about the important role bats play in our environment, avoid visiting caves and mines that may serve as seasonal homes for hibernating bats at this time of year.

Human disturbance is especially harmful to the State’s bat populations since the arrival of the disease known as white-nose syndrome, a fungus that has killed more than 90 percent of bats at hibernation sites in New York.

Follow all posted notices restricting access to caves and mines. When bats are disturbed during hibernation it forces them to raise their body temperature, depleting fat reserves. This stored fat is the only source of energy available to the bats until the weather warms in spring.

Bat Week is observed through October 31st, and is organized by representatives from conservation groups and government agencies in the United States and Canada.

The northern long-eared bat is protected as a threatened species under federal and New York State Endangered Species law. The current population for this formerly common bat is approximately one percent of its previous size, making the species the most severely affected by white-nose syndrome. Nonetheless, northern long-eared bats are still widely distributed in New York and their presence has been documented in most of the state’s 100 or so caves and mines that serve as bat hibernation sites.

Anyone entering a northern long-eared bat hibernation site from October 1st through April 30th, the typical hibernation period for bats, may be subject to prosecution.

There is currently no treatment for bats suffering from white-nose syndrome. For more information about white-nose syndrome, visit the White-Nose Syndrome Response Team website. Details about the protection of the northern long-eared bat can be found on DEC’s website.