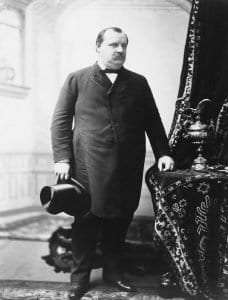 After the 1884 Democratic National Convention closed at Chicago, the nation’s attention turned to Albany, where nominee-in-waiting Grover Cleveland was doing his best not to make news prematurely.

“Gov. Cleveland spent another quiet day. In point of national interest, it was as quiet at the Sabbath,” according to a July 15th news report from Albany, one of several published over a two-week span in the The Morning Star of Glens Falls.

The roll out of a presidential campaign was different in that era.

The party adopted the platform and nominated a candidate at the convention, and then party leaders would travel some days later to formally notify the candidate.

For reporters covering a campaign, it was kind of like the old Army saying: “Hurry up and wait.”

Cleveland, the New York governor, was at his office early in the morning, as usual, on July 15th.

His day would be fairly routine, except for an uptick in callers and an afternoon photo shoot with three separate poses.

“His nomination has not changed him a jet. People of all degrees drop into the executive chamber with the same freedom as before, and are received with the same characteristic good humor and hearty welcome.”

A “local journalist” was starting work on a campaign biography.

By July 28th, the influx of callers was increased.

“The governor finds the work of receiving visitors and answering campaign letters encroaches on his time to such an extent that it is often long after midnight before he finishes the regular routine work of his office.”

The next day, the political atmosphere in Albany was percolating, leading up the notification ceremony on July 30th.

“The hotels are filled with politicians. Most of the members of the national committee have arrived.”

Cleveland denied that a draft of his acceptance letter, subject to revision, had been provided to several prominent Democratic leaders.

“According to some newspapers, the letter is written, but I say it is not,” Cleveland said. “It will be time enough to write it after I have been officially announced for my nomination. No, I have not committed my thoughts to paper yet.”

July 30th was “a great day for Albany” despite rain storms.

“Never before were there seen so many distinguished Democratic politicians in this city.”

At 3:30 pm the Albany Phalanx, apparently a quasi-military group, and a brass band marched to the hotel where party leaders were staying.

“They heeded neither wind, rain, nor muddy streets. Their white plug hats, the symbol of the club, were unprotected by umbrellas.”

The procession continued to the Executive Mansion, with Democratic leaders riding in carriages.

It was a simple ceremony that began when Cleveland came into the room at 4 pm.

“He was dressed as usual, in black frock coat, with high, standing white collar broad, black necktie. … No preliminary fuss was made.”

“The election of a president is an event of the utmost importance to the people of America. Prosperity, growth, happiness, peace and liberty even, may depend on its wise ordering.”

Cleveland said he was still grasping the significance of the nomination.

“Though I greatly appreciate it, I do not at this moment congratulate myself for the distinguished honor conferred upon me, because my mind is full of an anxious desire to perform well the part which has been assigned to me.”

That said, the ceremony was over.

“There was a season of handshaking at the close of the governor’s speech. Then the sliding doors were thrown open, revealing a well-spread table in the back parlor. A hearty welcome was given to all to refresh themselves.”

By 5:30 pm, participants had all left for a reception at the Fort Orange Club, and Cleveland was left at the mansion, alone, to contemplate the campaign ahead.

On July 31st, the day after the ceremony, Cleveland met, for the first time ever, his running mate.

Vice presidential candidate Thomas A. Hendricks, governor of Indiana, had been waiting for several days at Saratoga Springs until Cleveland was formally notified of his nomination.