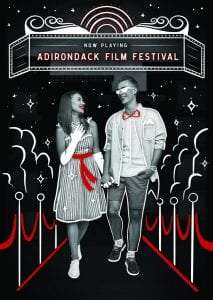 This year’s Adirondack Film Festival (AFF) will be held virtually. The “Film Festival in a Box” program will run October 15-18th.

The AFF films will be shown at specific times, as it would be with the in-person festival. Filmgoers will be given a full schedule and can recreate the experience of choosing which films to see and when. The full catalogue of films will be available “on demand” for Sunday.

Filmgoers will be able to vote on their favorites through a live voting app and an awards ceremony will be held via Zoom, with AFF trophies mailed to the filmmakers after the festival.

Special screenings include: Bacurau, Benny Loves You, and a 3D block of short films. In total, AFF is screening 16 feature-length films and 105 short films divided into 22 blocks (e.g. A Little Bit Twisted, Sweet Laughs, The Thrill Zone, I Love NY, etc.). Each film will have a very brief pre-recorded introduction by the filmmaker in lieu of a Q&A. Films will be screened via a Netflix-style platform which can be viewed either on a computer or a TV.

VIP passes are $79 and include full access to all films and the total festival experience box complete with AFF swag. Basic passes are $49 and include access to most films (excludes headliners). Prices will increase closer to the event.

More information, including a full lineup, can be found online. Tickets may also be purchased by calling the Wood Theater Box Office at (518) 480-4878.