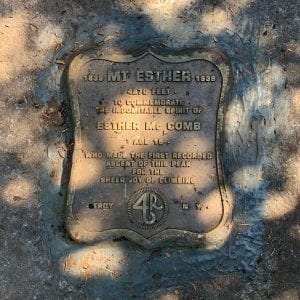 “For The Sheer Joy Of Climbing”

These words will likely sound familiar to anyone who has undertaken the journey to become a 46er, as they are inscribed on a plaque at the summit of Esther Mountain, High Peak #28. The plaque was placed on the summit in 1939 by The Adirondack 46ers to honor “the indomitable spirit” of the peak’s namesake, Esther McComb.

Esther was a local kid who grew up on a farm near Wilmington and spent her days staring at Whiteface with dreams of summiting. In August of 1839, Esther finally decided to tackle her dream and make her way up the trail-less mountain at the young age of 15. After many hours of hiking, she finally reached the summit. As she celebrated her accomplishment, she soon realized she was, in fact, not on Whiteface but standing on the lower peak next to it! While Esther was likely disappointed that day to have summited Whiteface’s neighbor, her memory and spirit of adventure lives on in her namesake peak as a reminder of the joy of hiking.