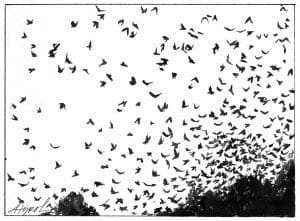 Whirlwinds of feathered bodies, iridescent beetle-blue on top and snowy below, are touching down all along the eastern seaboard. Flocks move in a loose collection of tumbles and dives, sweeping across fields and swamps. They pepper the sky, often collecting over bodies of water to skim for insects and catch a drink. As the sun sets, the scattered birds pull together, gathering like a slow-building storm.

At the peak of migration, flocks of tree swallows can contain hundreds of thousands of birds. Doppler weather radar – yes, weather radar – has revealed that staging points are relatively evenly spaced, almost always 62 to 93 miles apart. Migration flows down the eastern seaboard in a multi-month game of hopscotch as the birds make (comparatively) leisurely stopovers one roost after another.

In the northern parts of their range, swallows begin to move south in July. By early September, most have left their breeding grounds, which extend across most of the top third of the United States and well into Canada. Stragglers, however, are common.

Unlike many songbirds, tree swallows migrate during the day and fly low, foraging as they go. This makes their migration much more visible than, say, a warbler’s nocturnal, high-altitude odyssey. In terms of distance covered, tree swallows fail to impress: most settle down for the winter in relatively nearby Florida, or in Central America and the Caribbean. (Compare this to a barn swallow that might winter deep in South America.)

Tree swallows are one of the earlier songbirds to return in spring, arriving in parts of Vermont and New Hampshire as early as March. Their early arrival is related to the fact that they’re obligate cavity nesters, meaning that they don’t construct their own nests. Instead, they depend on woodpeckers and their ilk to provide tree cavities for nesting. Often, tree swallows are found in beaver habitat, moving in after woodpeckers excavate holes in dead or dying flooded trees. Tree swallows will also take readily to nest boxes. In some areas, the proliferation of nest box “bluebird trails” has been a boon to their populations.

Competition over holes to call home may spur their early spring arrival. First come, first served, and when you cannot create holes yourself, your options are limited to what is available any given season.

A second defining characteristic: unlike all other swallows, which dine exclusively on insects, tree swallows are able to digest fruit and seeds, including the fruits of bayberry and viburnum. Tree swallows that find themselves in a cold snap with reduced insect activity may instead descend upon a berry bush and make a feast of it.

It’s this ability to do a cedar waxwing impression that lets the birds move north months ahead of other swallows. They don’t need to wait for the spring buffet of insects to appear before they get to the business of nesting; in the meantime, they can supplement their diet with last year’s leftover berries.

After an intense period of jostling for position on breeding grounds, tree swallows breed for a few months in late spring and early summer. As soon as the young are fledged, they begin to migrate south again.

Although the tree swallow is one of the best-studied birds in all of North America, its migration ecology is still poorly understood. During the winter, they seem to continue their migratory habit of moving from roost to roost, following food supplies. There are no good records of when birds begin to leave their wintering grounds in spring; all we know of their return trip is when they begin to arrive back in their breeding range. As such, our picture of their migration, stunning though it is to witness, remains rather impressionistic.

That impression is one of a roving species that only seems to settle in one place as long as it needs to breed or wait out the worst of the temperate winter. Their fluid, maneuverable migration is a delight to behold on a September day.

Kenrick Vezina works for the Genetic Literacy Project and is a freelance writer, naturalist, and raconteur based in the Greater Boston area. The illustration for this column was drawn by Adelaide Tyrol. The Outside Story is assigned and edited by Northern Woodlands magazine and sponsored by the Wellborn Ecology Fund of New Hampshire Charitable Foundation.