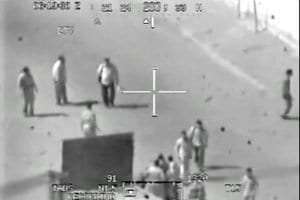 In it, McCord narrates military footage depicting the indiscriminate slaying of more than a dozen people in the Iraqi suburb of New Baghdad — including two Reuters news staff.

Reuters had been trying to obtain the video at the center of the film through the Freedom of Information Act since the time of the attack without success, until was leaked by Private First Class Chelsea Manning.

Shot through an Apache helicopter gun-sight, viewers see the unprovoked slaying of a wounded Reuters employee and his rescuers. Two young children involved in the rescue were also wounded.

The video was a collaboration with Wikileaks and can still be seen in its original context at collateralmurder.wikileaks.org (you can also watch it on the Sanctuary’s YouTube channel, although that platform restricts viewers of the film to those over 18 year of age).

Currently imprisoned in London, WikiLeaks founder Julian Assange is due to appear for a full extradition hearing, postponed since May due to COVID-19. If extradited to the United States, he will face 17 charges under the Espionage Act and conspiracy to commit computer intrusion in relation to the publication of classified documents in 2010 and 2011. His case has raised First Amendment press freedom issues that govern the fate of journalists.

The Sanctuary for Independent Media is located in an historic former church at 3361 6th Avenue in North Troy. The Sanctuary hosts screening, production and performance facilities, training in media production and a meeting space for artists, activists and independent media makers of all kinds.  More information can be found on their webpage.

Illustration: Pedestrians on a street in the Iraqi suburb of New Baghdad are seen through a U.S. military Apache helicopter gun-sight moments before the operators of the helicopter open fire.