One of the first developments of the Industrial Revolution was powered sawmills. Thus was born the covered bridge, made of heavy structural timbers for trusses, and sheathed with easily-replaceable wood sheathing to protect the structure members from rotting. (This was years before creosote was used to protect exposed wood.)

We think of covered bridges as romantic rural remains of a by-gone era, but in the early days of railroading, these were the cutting-edge of civil engineering. For instance, the Troy-Green Island bridge, some seven spans, contained over 1.7 million board-feet of lumber, and was considered a national wonder when it was completed in 1832. Except for some stone arch bridges, most railroad bridges in those early days were covered wooden bridges like the Troy-Green Island Bridge. 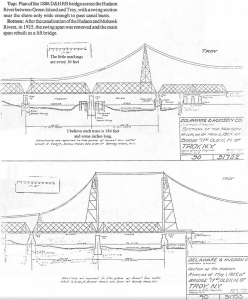 That first bridge between Troy and Green Island, NY, was built to provide the first railroad service to the city of Troy via the the Rensselaer & Saratoga Railroad.  It had a swing span right next to the Troy shore – the pivot point was on the shore itself.

At first, the passenger cars were uncoupled from the steam locomotives in Green Island and horses were used to pull them across the bridge to Troy’s first depot, the Troy House, just a block or two south on River Street.

The rails were removed from River Street and the line and new Union Depot were located on 6th Avenue in 1851. Locomotives were then used the entire way, including through the bridge. A spark from one of these engines set the bridge on fire in 1862 and a good westerly wind set the entire downtown on fire. (Smoke from that fire included in Joseph Hidley’s popular painting of nearby Poestenkill).

A second wooden bridge was built right away and then in the 1880s, with the sudden availability of cheap steel, railroads went whole-hog into replacing old wood bridges with steel girders and trusses and the Green Island bridge became steel.

The Troy-Green Island bridge is shown above in the close-up of an 1880s bird’s eye engraving with the west end already converted to steel trusses. At the time, this was a swing bridge, with the movable span at the Troy end. As rebuilt to steel, it was a Warren Truss bridge, which was a typical steel truss bridge design of this era. The movable swing section, like the wood versions, only cleared about 30 feet.

In the 1920s, the second span of the bridge was converted to a lift while the first span, the swing span, was replaced with a short fixed girder bridge. The old Erie and Champlain canals had been replaced by the NYS Barge Canal, and because the mules and horses pulling small barges had been replaced by motorized tug boats, wider clearance was needed. 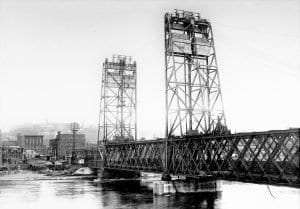 The bridge’s northern spans allowed for train traffic, the southern span carried trolleys, and charged tolls for cars and pedestrians.

Railroad service to Troy ended in 1963, about 130 years after it had begun, When the rails were finally removed from downtown Troy in 1964, the bridge was sold to the state.

Many locals remember when the bridge failed during a spring flood on March 15, 1977.  The bridge had been inspected just a few weeks before an the piers were scoured from below, and the heavy counterweight of the lift span caused the entire bridge to twist.

Luckily, there was no loss of life, despite its occurrence during rush hour. You can see film of the immediate aftermath of the collapse on YouTube here, and more film from a short while later here.

It was replaced with the current vertical lift bridge in 1981.