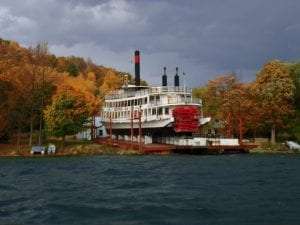 Where I live, autumn typically starts in late August, when pockets of red maples start to turn scarlet around the marshes and lakes. Uh oh. As they say in Westeros, “winter is coming.”

But not before we get to enjoy fall. Yes, a Northeastern autumn is a postcard cliché. Yes, the tour buses and land yachts full of leaf peepers clog the roads. But, really, who can blame them? No matter how many you’ve seen, fall in the Northeast is still one of nature’s most awesome spectacles.

And, so, so ephemeral.

We know basically how the whole thing unfolds, and why. But despite all that has been discovered about tree physiology, we still haven’t unpacked everything.

“A lot of general patterns we can see and explain, but there’s a lot of complexity that we certainly don’t know about the fall color,” said Jay Wason III, a tree physiologist and assistant professor in the School of Forest Resources at the University of Maine.

Basically, we have autumn in temperate zones because in the months of low sunlight, cold temperatures, and ice and snow storms, large, flat leaves would be a liability, said Wason.

Decreasing day length is a main driver of the timing of the color change and the resulting leaf drop. But temperature and precipitation also play roles. You can see this by looking at the side of a mountain, where trees at higher elevations typically change color earlier, reflecting colder temperatures, even though all of the trees on the mountainside are reading the same day length. The same holds true in low-lying areas, where colder air pools and creates fall-like temperatures sooner.

Plants sense changes in day length using special molecules called phytochromes, and react by curbing production of chlorophyll, the green pigment that is the heavy lifter when it comes to photosynthesis. As chlorophyll disappears, underlying yellow and orange pigments, called carotenoids, are unmasked. They’ve been there all along, but only become visible now.

Reds are something else. Known as anthocyanins, they’re produced in the fall, but we’re not really certain why. Wason said one hypothesis is that these red-reflecting pigments are helping to protect the leaves from damage by sunlight as the tree is working to siphon all the nutrients it can from its leaves, nitrogen being the most important. 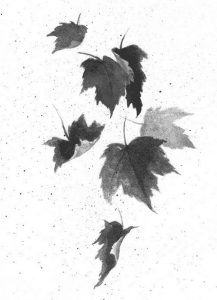 Temperature and precipitation help determine how much of this red pigment is produced, and thus how colorful the fall will be. To make anthocyanins, the tree needs sugars, and to produce those sugars it needs moisture and sunlight. That’s why a fall drought can definitely put a damper on the season’s colors, said Wason.

As the leaves change colors, each forms a corky layer – the abscission layer – at the end of the stem, which weakens the bond to the twig and eventually cuts it free. After the leaves fall, the yellow, orange, and red pigments break down, leaving nothing but tannins that turn brown. It’s those same tannins that slow the breakdown of leaves and allow them to become a mulch layer on the forest floor.

The careful observer will note that, in spring, tree species seem to leaf out at different times. Ashes, for instance, are often one of the last to put on leaves. It’s like they’re not certain about commitment. When winter is coming, everyone is committed.

“We tend to see more variability in the spring and less in the fall,” said Wason. Perhaps that’s because tree species tend to be a little more responsive to temperature variation in the springtime, he said.

No one’s got the definitive answer, but it’s probably related to each tree species’ growth strategy, he speculates. In springtime, ashes spend a lot of time and energy building large water transport cells in their stems, only later moving on to leaves. Once built, however, that big plumbing system can move a lot of water and nutrients. In other words, they catch up. By fall, things have evened out.

Scientists are still probing for answers to questions about the fall foliage season. The fact that the leaf extravaganza is a big economic boon to states in the northeastern US is a good excuse for the research. So is climate change and how a warmer earth will affect the annual spectacle.

Warmer temperatures could cause a shift in the timing of fall foliage; summer or fall droughts could affect color saturation; tree species will move over time in response to local climate change. Exactly how things will play out long-term is hard to predict. But autumn is on now.

Enjoy it while it lasts.

Joe Rankin writes on forests, nature, and sustainability. The photo above, by John Warren, is the Minnie Ha Ha in dry dock on Lake George in October 2012. The illustration for this column was drawn by Adelaide Tyrol. The Outside Story is assigned and edited by Northern Woodlands magazine and sponsored by the Wellborn Ecology Fund of New Hampshire Charitable Foundation.