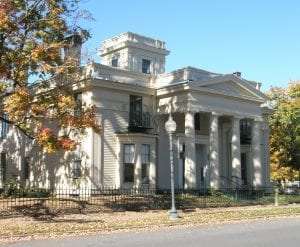 Tour topics this season highlight the Canfield Casino and Congress Park, Franklin Square, and the historic West Side. All Sunday morning tours last approximately 90 minutes and require walking and standing on varied terrain.

“Hidden Histories” on Thursday, October 1st at 7 pm, via Zoom and Facebook Live. Carol Godette will look into the history of several properties throughout Saratoga Springs including her own home, the site of Ben & Jerry’s, former Convention Hall, and 395 Broadway, today Fingerpaint Marketing.

Saratoga’s Historic West Side set for Sunday, October 18th at 10:30 am. Attendees will meet at the Gideon Putnam Cemetery Entrance on South Franklin Street. George DeMers will lead guests through the restored historic West Side to learn about Saratoga’s Irish and Italian immigrants who helped shaped the history of this unique district.

“Women’s Suffrage in Saratoga” on Tuesday, October 27th at 7 pm via Zoom and Facebook Live. Learn about the pivotal role Saratoga Springs played in the women’s suffrage movement and the history of women’s rights conventions from Nancy Brown.

Twilight Cemetery Tour: Madness, Murder, Untimely Deaths, and Strange Coincidences on Friday, October 30th at 5 pm. Attendees will meet at Sackett Gates Entrance of Greenridge Cemetery, Lincoln Avenue Entrance. Gloria May will look at the tombs and monuments of Greenridge Cemetery, discussing the historical and architectural background of the American rural cemetery movement while unearthing tales of Saratoga’s most notable residents.

Due to current restrictions in New York State, the Autumn Strolls will be limited to twenty guests, which currently is less than the maximum of 50 that is currently allowed, and tickets must be purchased in advance until otherwise noted. The cost per tour is $15 for SSPF members and $20 for non-members.

For additional information or to purchase tickets call the Saratoga Springs Preservation Foundation at (518) 587-5030, email Anne McDonough, Administrative Assistant, at admin@saratogapreservation.org, or visit their website.