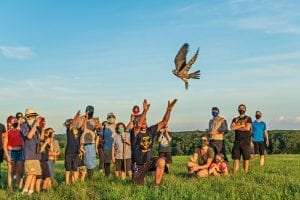 The late summer release occurred following their rehabilitation at The Raptor Trust‘s Bird Rehabilitation and Education Center in Millington, New Jersey. Local Cub Scout and other trail users we also on hand. Peregrine falcons are known as the fastest bird for the ability to reach speeds over 200 mph while diving for prey.

The River-to-Ridge Trail was identified as an ideal location for the release by the rehabilitators because of the trail’s proximity to the Shawangunk Ridge and its expansive site lines that allow greater monitoring as the birds take flight and re-enter the wild. Peregrine falcons prefer to nest at high altitudes and along cliff faces, like those found at the nearby ridge. 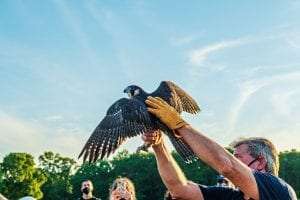 Having worked on the nest-site management and peregrine falcon rehabilitation and release program in the Hudson Valley, New York City, and Long Island for the past 35 years, Nadareski has extensive experience rescuing and nursing peregrine falcons back to health before setting the birds free.

In addition to performing peregrine falcon rehabilitation and release as part of his professional responsibilities at the New York City Department of Environmental Protection (NYCDEP), Nadareski also volunteers his time and falcon expertise with the New York State Department of Environmental Conservation and also leverages the releases as educational opportunities for others, including with the local cub scout troops he represents.

Nadareski’s responsibilities include the development of protection strategies for nest sites on natural cliff ledges and on buildings, bridges, and towers in urban landscapes; banding young birds in the nest; working with wildlife rehabilitators to band and release rehabilitated falcons, and environmental education.

After a significant decline between 1950-1970, peregrine falcons remain on New York State’s endangered species list, though populations of the bird have seen growth in the last few years.

Peregrine falcon populations continue to expand, and have also adapted to urban landscapes, like New York City, where the concrete, steel, and glass canyons resemble that natural mountains.

More photos, and a video of a falcon release can be found here.