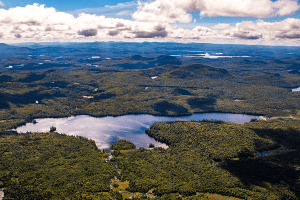 Over the decades, the property has been lightly developed by the Whitney family, which maintains a large complex of buildings in a mountain estate called Deerlands on Little Forked Lake, and  two inholdings totaling around 400 acres on Forked Lake and Plumley Pond at the south end of the tract.

To paraphrase a great American moral leader, the moral arc of the Adirondack Park bends towards preservation and protection. Each year that passes, the Blue Line shines brighter because the protected lands inside grow more critical. The 3-million-acre Forest Preserve in the Adirondacks and Catskills is one of the great success stories in New York State. It has been built through a fine multi-generational, bipartisan conservation tradition from 1885 right up until now. Whitney Park has been eyed by generations of Adirondacks conservationists as a cornerstone for a protected Adirondack Park, a vital missing link for historic canoe routes, as a grand landscape that one day should become part of the public Forest Preserve.

Whitney Park is being marketed for sale by John Hendrickson, the widower of Saratoga Springs socialite and philanthropist Mary Lou Whitney, who died last year. Mrs. Whitney bequeathed Whitney Park to Hendrickson, who is asking $180 million for the property, around $5,000 per acre. In the two weeks since he announced that Whitney Park is for sale, Hendrickson says he has rejected a half dozen bonafide offers from those who planned to develop the tract.

The public listing of Whitney Park for $180 million has brought out sentiments that these lands must be protected, just not by the state. The argument goes that the Whitney family has protected Whitney Park for generations and that a new private owner will carry this legacy forward. The State of New York cannot adequately manage public lands, we’re told, so the state should not buy Whitney Park. In addition to Hendrickson, this argument was most forcefully made in an editorial by the Adirondack Daily Enterprise, followed by a published interview with Hendrickson in the Enterprise where he stated again he would not sell to the state. Hendrickson and the Daily Enterprise tag-teamed the argument that the Cuomo Administration is not up to the task of managing sensitive natural resource areas like Whitney Park.

Though the Adirondack Park is a landscape characterized by active debate, there is broad consensus that we need better management of the Forest Preserve. The lack of investment in Forest Preserve management by Governor Andrew Cuomo over the last 10 years is mystifying.

Though Governor Cuomo has shown extraordinary competence and zeal in some areas, he is inept at public lands management.

The Governor knows the Adirondacks. His ex-girlfriend long kept a house in Saranac Lake. He has personally promoted the Adirondack Park, using his star power to encourage people to visit the region with his annual raft races. And while people have visited the Adirondacks in record numbers since 2010, the Governor has refused to adequately invest in improved management to educate and control the crowds.

The dramatic increase in public use of the High Peaks, and other places in the Adirondacks, mirrors trends across the country as wild and beautiful places are overwhelmed. The rise in public use of the Forest Preserve, most keenly seen in the High Peaks and hiking trails around Lake George, is also clearly evident in any trip to Rondaxe Mountain in Old Forge in the western Adirondacks or Kane Mountain in Caroga in the southern Adirondacks, among many other popular trails. The boom in public use has revealed longstanding weaknesses in the management of the Forest Preserve.

The Daily Enterprise argues that a private organization or Billionaire X should buy Whitney Park and preserve it by letting it remain as is and keeping the public out. This is the same line taken by Hendrickson.

These sentiments show the sad state of Forest Preserve management, where there is no confidence in Governor Andrew Cuomo or his hamstrung agencies – the Department of Environmental Conservation and Adirondack Park Agency – to adequately manage the public Forest Preserve. This is a truly sad state of affairs.

However, the answer is not to put up fences around wild places and keep people out or rely upon some group or Billionaire X to protect critical natural resource areas. In New York, the Forest Preserve is the people’s land. And, while some people who use the Forest Preserve need basic education in public lands use and stewardship, the vast percentage of the Forest Preserve today stands wild, intact, unblemished, and beautiful. And, while there are popular trails where the state has not adequately provided safe parking areas, educational information, and restroom facilities, the vast majority of trailheads throughout the Forest Preserve are safe, easily accessible, and clean.

We should not give up on the Forest Preserve because of the poor management of one Governor.

By the logic of the Adirondack Daily Enterprise, just because some people toss their cigarette butts or spit out their gum on the sidewalk, we should give up on public sidewalks. Only half of Americans vote, a stark failure compared with most other major democracies in the world, so perhaps we should give up on that too.

It would be a grave mistake to give up on the dream of the Forest Preserve and let those who sabotaged the native fishery on Little Tupper Lake win.

My kids are their 20s. They grew up camping on Little Tupper Lake and Round Lake. I remember a friend’s daughter as a five-year-old yelling out of her tent at the grown-ups sitting around the fire to “tell the loons to shut up” because their continuous and loud tremolos that night awoke her. At other trips, we sat on the sandy beaches huddled in sleeping bags listening to coyotes howl across the water. At others, we marveled at the Milky Way reflected magnificently in the dead calm black waters. And yes, the native fishery has been damaged, but my kids pulled in many a fine bass from Little Tupper Lake and Round Lake over the years as well as native brook trout.

Here’s the reality. Despite the challenges facing the High Peaks Wilderness in particular, and management of the Forest Preserve generally, the public is extremely happy with their opportunity to hike and explore these marvelous public lands. They keep coming back! Yes, we need to improve public education, and we need more Forest Rangers, Wilderness managers, trail crews, and a visitors center for the High Peaks, but it would be a grave mistake to give up on the Forest Preserve.

Thankfully, short-sighted thinking was resisted by past Governors who acted boldly to protect the Adirondacks during their terms in office. The naysayers did not win out when Governor Charles Evans Hughes purchased Mount Marcy, Redfield, Allen, and Skylight mountains or when Governor Al Smith bought Lake Colden. Imagine today if the state’s highest mountain was privately owned. Thankfully Governor Thomas Dewey did not listen to the naysayers when he bought islands and long stretches of wild shoreline on Lake George.

Thankfully, Governor Nelson Rockefeller bought the Moose River Plains. The millions who have camped on the Cedar River-Limekiln Lake Road or snowmobiled there for 50 years are pretty happy that these lands belong to the people.

Thankfully, then DEC Commissioner Peter A. A. Berle and Governor Hugh Carey bought Lake Lila and Armstrong Mountain, Basin, Blake, Colvin, Dial, Gothics, Haystack, Saddleback, Saw Teeth, Upper Wolf Jaw, Lower Wolf Jaw, and Noonmark Mountain. Anyone who has hiked the Great Range or gazed upon it in wonder from any number of High Peaks is pretty happy that these mountains are part of the Forest Preserve. Anybody who has camped at Lake Lila is pretty happy these lands are Forest Preserve.

Thankfully, Mario Cuomo bought Low’s Lake, happily paddled by hundreds of thousands since. Fortunately, George Pataki did not listen to naysayers when he bought Little Tupper Lake, Round Lake, the South Branch of the Grasse River, Lyon Mountain, and Madawaska Flow, among many other places.

Seriously, have our dreams grown so puny that the frustrations of inept management by one Governor’s administration will cause us to give up on the 125-year success of the public Forest Preserve? Are we to be a country with public lands that belong to the people, and are managed by the people, and for the people? Or, are we to be a country where the people are dependent on the benevolence of Billionaire X to provide for us our American birthright of wild spaces? John Hendrickson says that he will not sell Whitney Park to the state and will sell to the highest bidder with a handshake agreement that they not develop the property. These lands deserve better. These lands deserve to be part of the Forest Preserve.

Click here to sign a petition to buy Whitney Park at savewhitneypark.com or adirondackparkpetition.com. Help make these lands Forest Preserve.

Photo of Salmon Lake stands in the foreground, part of the Whitney tract, with Rock Lake and Little Tupper Lake in the background