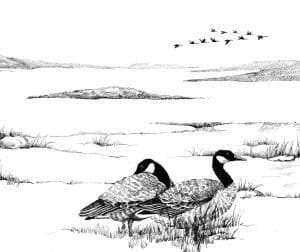 This has always been my perception of bird migration in the fall: the days grow short and cool and then, one day, I notice a v-shaped caravan of Canada geese flying southward. Then another and another. Within a few weeks of that first sighting, I hear their melancholy call one final time for the season. Then they, and all the summer birds, are gone.

It’s a mass exodus for warmer climes, over and done in the blink of an eye and long before the snow flies.

But what of the geese on the unfrozen mill ponds in January? Or the robins at the birdfeeder in December? It turns out that the process of migration is much longer and less predictable than my cursory observations had led me to believe. First of all, for some species, fall migration begins long before the first ears of corn are ready to be picked. Take, for example, the yellow warbler, whose massive breeding range extends from parts of Mexico to Newfoundland and into Alaska. It is among the earliest songbirds to arrive in the spring and among the first to embark on the return journey.

According to Andrew Farnsworth, a research associate with the Cornell Lab for Ornithology, birders in our region may notice yellow warblers in the area from the end of April to as late as mid-September, and conclude that the birds stay for all those months. But that’s not what is going on.

The birds that settle in our area in the spring start the breeding cycle earlier than those that go on to nest in northern Canada or Alaska. By late June or early July, the newly hatched yellow warblers of our region fledge. They and their parents start their journey back to Central and South America. But their departure does not mean the absence of the species in our area, as yellow warblers from more northern areas, and therefore later breeding cycles, will begin passing through. We get the pleasure of the yellow warblers’ presence from April through September – just not the same individual birds.

Some birds, like dark-eyed juncos, we see year-round, giving the impression that they are non-migratory. But again this not entirely accurate, said Farnsworth. Some juncos may stay put in the Northeast right through winter. But those tend be the birds that are behaviorally dominant – that is, they are able to secure a desirable territory, keeping competition at bay. Less dominant birds may be forced to migrate to southern regions in search of food and their departure may take place as late as December.

While fall and winter mark the departure of many birds from our region, it can also be a time of arrival for a few species. Among them are common redpolls, who make their home in the arctic tundra and boreal forests, and pine siskins, who tend to be year-round residents in the more southern areas of Canada and mountainous regions in the western United States. These birds are known as irruptive migrants, meaning they will move only if food in their usual territory becomes scarce. So one year you may see large flocks of common redpolls at your feeder, but not a single one the following year.

This fall, as I watch a flock of Canada geese fade from sight, I will know that it is neither the beginning nor the end of the season’s migration. It turns out that birds’ seasonal movement is a long and complex process that varies bird by bird, and from one year to the next.

Carolyn Lorié lives with her two rescue dogs and very large cat in Thetford, Vermont. The illustration for this column was drawn by Adelaide Tyrol. The Outside Story is assigned and edited by Northern Woodlands magazine and sponsored by the Wellborn Ecology Fund of New Hampshire Charitable Foundation.