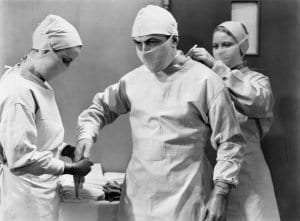 Beginning in the 1940s, medical wear began the journey towards what we know and easily recognize today.

What we call “scrubs” originated as the white gowns and drapes that were worn by surgeons and operating staff. At first, everything was white – the doctor’s coats, the operating gowns and the nurse’s uniforms. Operating rooms were also a gleaming sanitary white, with bright task lighting.

All this white could be overwhelming on the eyes. When surgeons’ eyes shifted from the blood red of their surgeries to the harsh white of their surroundings, it caused serious eyestrain. The lighting and sanitary conditions had to remain, so it became prudent to change the colors of the clothing. Besides, nothing shows blood and other stains like white garments. Green, which is red’s opposite color on the color wheel, was found to be soothing to the eye. Light blue also had a similar effect. 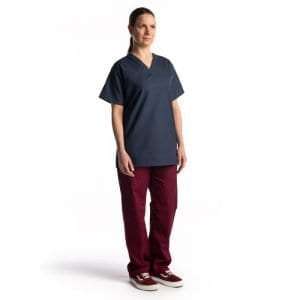 Change is never quick in these cases, so it wasn’t until the 1950s and 1960s, coinciding with the Korean and Vietnam wars, that the modern light green scrubs began completely replacing the white drapes of the World War II generation. The garments masked stains a bit better in addition to soothing the eye. In keeping with relaxing standards in everyday civilian clothing, medical workers, especially in operating rooms, began wearing comfortable, loose drawstring pants and short-sleeved tunics often with pockets.

These garments were called “scrubs” because they were scrubbed clean through rigorous washing procedures. The garments caught on in popularity and the medical community has never looked back. The earliest scrubs were pretty shapeless, but by the 1970s, manufacturers began to size them better and offer different styles. The green scrubs were still standard for operating rooms, but over the years, non-surgical staff began wearing them too. 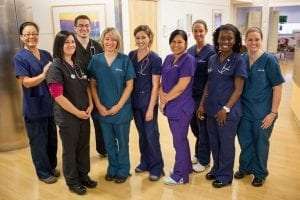 Today, the scrubs used in surgical settings are either the solid light green, light gray, light blue or a light greenish blue cotton or poly/cotton fabric. Medical staff in other areas are color coded in some hospitals, in order to differentiate between licensed medical staff such as nurses and radiology techs, non-licensed assistive staff, and general support staff, such as janitors and orderlies. A modern hospital is a sea of multi-colored scrubs.

Scrubs are used at veterinary clinics, dentist offices, and in correctional facilities as inmate uniforms. Patterns and non-standard colors appear in use in pediatrics practices, as well as with vets and dentists. Generally speaking, in both hospitals and other practices, the clothing is owned by the facility, and often contracted out to commercial linen services which can wash them at high temperatures, insuring the killing of germs and bacteria.

In Troy, Shamron Mills produces several styles and colors in scrubs, along with warm up jackets and other garments for the medical community. They don’t offer retail or sell to the public directly, but they’ve been in medical clothing business for more than thirty years, and are in maximum production of scrubs and other medical garments during this critical time in our country’s history.