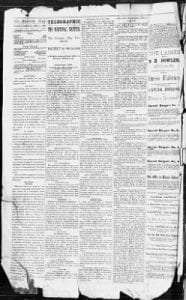 “A bout of fisticuffs occurred at the freight depot yesterday afternoon in which several glove handlers were engaged. No less than forty spectators were present. No damage was done beyond desecration of the Sabbath,” The Morning Star of Glens Falls reported in its debut issue.

Before that, Glens Falls readers would have had to wait until the afternoon Glens Falls Times came out to read about the fracas in the neighboring village.

“We herewith present, we hope, for public approval, the first issue of The Morning Star. Our object is to publish a daily newspaper and to conduct a practical, common sense printing establishment in its varied and legitimate boundaries,” the paper editorialized. “We do not hope to please everybody. But if honest purpose and hard work merit success, we feel that our efforts will be appreciated and rewarded by the patronage of a generous public.”

In other breaking news, Verplanck Colvin, superintendent of the Adirondack survey, was staying at The Rockwell House hotel, and Henry Crandall, a local lumber baron and philanthropist, was on the brink of a redevelopment project.

“We understand that Henry Crandall intends building an extensive addition to he rear of his block, corner of Glen and South streets. The places occupied as a barbershop and meat market on the latter thoroughfare will be torn down soon and a fine store building substituted.”

The first morning daily newspaper in Glens Falls had been in the works for some time, as the publisher gradually built up a subscription list and advertising base.

Single copy price was 3 cents. “There are larger papers than the Star, but it is large enough for our present requirements, and what it may lack in size we hope to compensate for by the order, neatness and interest important to its columns.”

The editorial pledged the paper would be non-partisan and factual.

“Personal controversies are foreign to honorable and legitimate journalism, and will not be permitted in the columns of the Star.”

The intent was to broaden the spectrum of news coverage, not incite contention with existing Glens Falls newspapers, of which there was the afternoon daily and two weeklies.

“The Star always takes pleasure in giving credit where credit is due, and therefore most cheerfully conceded that the Daily Times’ report of Bishop Doane’s sermon at the Church of the Messiah Sunday was exceedingly graphic and highly meritorious in a literary sense.”

The debut issue contained a mix of local, national and world news, short fiction, and poetry.

“With this brief exposition of our aims the Star takes its place in the newspaper firmament.”

The paper carried more than the typical share of local news for its era.

The effort paid off.

The Morning Star added 214 “bona fide” paid subscribers in its first four weeks of publication, and the owners purchased a new press, capable of printing multiple pages on one sheet of newsprint “The new press, besides greatly enlarging our facilities for all kinds of work, will enable us to increase the size of The Star, which improvement is in contemplation for the near future,” the paper reported on April 30, 1883.

On May 5 The Morning Star reported that it had the largest circulation in Queensbury, the town that included the village of Glens Falls, of any newspaper.

“In the newspaper business, distinction is not won by favor but by hard work and a natural adaption,” editors boasted on May 7.

On May 21 the paper reported that it had more than tripled its circulation at Sandy Hill, now Hudson Falls, in three days. On June 16, the paper expanded from a five-column to a six-column sheet.

“In our salutatory eleven weeks ago, we promised to increase the size of the paper as soon as our patronage and the condition of our exchequer (treasury) would warrant,” the paper editorialized. “At that time, it was thought at least six months would elapse before the expense of such a step could be judiciously assumed. We find, however, that people are disposed to encourage legitimate enterprise, and the generous support accorded us has enabled us to make the enlargement much sooner than at first contemplated.”

The subscription list continued to grow. “The little Star twinkles merrily,” the paper reported on July 10. “Twenty-five new subscriptions were added to our list during the last five days.”

The Morning Star published its first extra edition on July 16, 1883, when editors decided coverage of an afternoon boiler explosion and fire at the Glens Falls Paper Co. mill in South Glens Falls could not wait until morning.

“At half-past seven the subject of issuing an extra was broached in the editorial room, and at 8:45 (pm) the newsboys were hawking the papers on the street.

The special run of 500 copies sold out in thirty minutes.

On July 18, the paper reported it had added 24 subscribers over the previous six days. The week of Sept. 11 The Morning Star published an extra edition distributed daily for free at the Warren County Fair.

“The publishers have worked hard to produce a reliable, legitimate newspaper. The condition of their coffers was not encouraging at the outset. Their hands and brains comprised the bulk of the capital, and there was no alternative but toilsome days and nights in establishing the new enterprise.”

In 1909, owners of The Morning Post, a later Glens Falls daily newspaper, purchased the real estate and subscription list of The Morning Star and combined the publications as The Post-Star..