The doctrine can be paraphrased in terms similar to these: “We (white men) belong to a superior race and civilization, be it in economic, military, or moral understanding. This primacy demands from us to direct and civilize the rest of humanity.”

Mapping of the annexed world was a responsibility of colonial governments which employed scholars to carry out the tasks of recording and collecting. Anthropological collections from Africa, Asia, and Pacific Oceania were transported to Europe and America. Colonial expansion changed the traditional focus of exhibitions. Museums represented a powerful tool of empire.

The tradition of “freak shows” in England dates back to the reign of Elizabeth I. As early as the sixteenth century, physical deformities were no longer deemed bad omens or feared as evidence of evil spirits. Medical “monstrosities” became standard components of traveling exhibitions. Such shows demanded the intervention of a new type of entrepreneur – the human rarities agent. Capitalizing on the public’s desire to goggle and gawk, these middlemen were remorseless human traffickers.

Menagerie owner Stephano Polito was born at Moltrasio, Lake Como, Italy. He changed his first name to Stephen on becoming a naturalized Englishman. Early in his career Polito specialized in the exhibition of “exotic” human beings. At London’s 1790 Bartholomew Fair he showed three “wonderful Wild-Born Human Beings … found in a remote valley, adjoining the Alps.” These “monstrous craws,” as they were named by showmen, were individuals afflicted with the swelling of the thyroid gland (goitre). The lump in the throat moves up and down when swallowing. The condition attracted crowds of onlookers.

It was not until the nineteenth century that such shows caught the imagination of a much larger viewing (and paying) public. The Victorians craved for entertainment of all sorts, from the sordid to the high-minded. The display of “freaks of nature” became a booming business.

With the growth of British Empire, the emphasis changed from physical to racial characteristics. Exhibitions of exotic populations became common in the 1870s in the midst of imperialist ambitions and colonial pride. The emergence of social Darwinism advanced the establishment of human zoos. 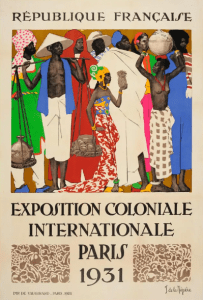 Columbus’s introduction of indigenous Americans to the Spanish court intensified European interest in non-white races. During the Renaissance, the Medici family founded a famous menagerie in the Vatican. As well as various exotic animals, Cardinal Hippolytus Medici added a collection of people of different races and languages (designated Moors, Tartars, Indians, Turks, and Africans).

At the World Exhibitions of the late nineteenth and early twentieth centuries attempts were made to educate the public. A new pattern was set by which anthropologists were involved in order to stage “living exhibitions.” Thousands of indigenous people from all over the world were put on display in a “natural” or “primitive” state to demonstrate racial difference. A feature of the 1878 Universal Exposition in Paris were villages populated with people from the colonies of Senegal, Tonkin, and Tahiti (“villages nègres”).

The Dutch pavilion at the same exhibition drew attention to the East Indies. In front of the main building stood a statue of Jan Pietersz Coen who, as Governor-General, had forced the Indonesian archipelago into submission. There was a Javanese village (“kampong”) which was inhabited by “natives” who performed dances and rituals. Visitors passed through a tobacco shed, crossed a bamboo bridge, gathered under a nutmeg tree, and entered a compound with a pagoda.

The 1889 Paris Universal Exposition also displayed a model kampong which illustrated aspects of communal village life from agricultural practices to religion and entertainment. The sophistication of Javanese music created a sensation. Claude Debussy, then a young composer at the beginning of his career, was bowled over when he first experienced the tonality of a gamelan orchestra. 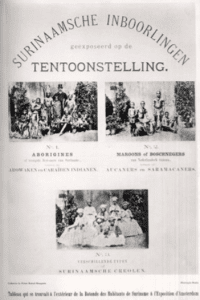 In 1883, the Exposition Universelle Coloniale et d’Exportation Générale (International Colonial and Export Exhibition) took place in Amsterdam. It was the first exhibition of its kind, with twenty-eight nations presenting pavilions of colonial trade and exploitation.

The idea had been inspired by the success of the East India pavilions at the World Exhibitions. Amsterdam had something unique to offer: a profitable colonial empire which for many foreign observers held an almost dream-like fascination. The event lasted from May to October and drew over a million visitors.

Dutch control of the Guiana coast was highlighted too at the Exhibition. Colonial conflicts with the English were settled in 1667 when present-day Surinam was acquired in exchange for what is now the city of New York. A selection of indigenous people were brought from there to the 1883 Exhibition and displayed in a human zoo.

The example of the Amsterdam Colonial Exhibition was repeated in Marseille (1906 and 1922) and in Paris (1907 and 1931), also exhibiting human beings in cages. The 1931 Paris Exhibition drew thirty-four million visitors. Significantly, the communist Anti-Imperialist League organized a small counter exhibition, exposing “La Verité sur les Colonies.” Although attended by relatively few people, it was a sign that attitudes towards human zoos were evolving and gradually changing. 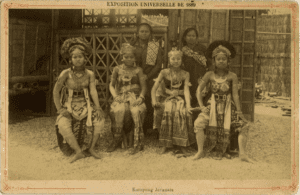 Human zoos emphasized cultural differences between European and non-European peoples. They were steeped in racist feelings of white superiority. Exhibits were designed to underline the unequal pace in the evolution of man. America created its own version of the human zoo.

Following the 1898 Spanish-American War, the United States acquired the Philippines, Guam, and Puerto Rico. At the 1904 St Louis World Fair, tribal cultures from the Philippines and other territories were exhibited in a “parade” of evolutionary progress. The fair featured a forty-seven acre area that housed more than 1,000 Filipinos from dozens of different tribes.

The exhibit showcased full-size replicas of living quarters that were erected to stress the backwardness of the nation and its inhabitants. The showing included an archery competition advertised as the “Savage Olympics Exhibition.” Anthropology had deteriorated into entertainment.

The show included an Igorot village which featured indigenous people in minimal clothing. They were presented as dog-eaters. Although restricted to ceremonial occasions under normal conditions, at the fair dogs were fed daily to the Igorot. As such scenes proved popular, the display took on a life of its own. Members of the group continued to “perform” at fairs and carnivals in North America until the “show” was banned in 1914.

In 1893, Chicago celebrated the 400th anniversary of the landing by Christopher Columbus with a World Exhibition. Frederic Putnam, director of the anthropology department at the fair, invited Prussian-born Franz Boas to collect ethnographic materials. He organized displays of Eskimo art. Putnam would later be appointed director of the Peabody Museum of Archaeology and Ethnology at Harvard (founded in 1866, is the oldest museum of its kind; the Musée d’Ethnographie du Trocadéro in Paris dates from 1878). 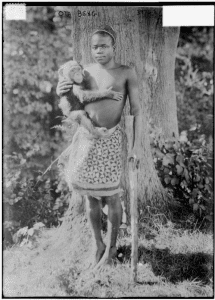 Ota Benga, a native of the Congo, had represented the African section of the St Louis Fair. In 1906 he was taken to New York at the behest of Madison Grant, head of the city’s Zoological Society. Benga became part of an “ethnological” exhibition that was organized by William Temple Hornaday, the first Director of New York’s Zoological Park (opened in 1899 and known as Bronx Zoo).

Touted as the “savage pygmy,” Ota was displayed in a monkey house, shot targets with a bow and arrow, and wrestled with an orangutan. With his teeth filed to points and his cage floor littered with bones, he was made to play the role of a menacing savage. Labelled the “Missing Link,” it was suggested that in evolutionary terms Africans were closer to apes than were westerners. The public flocked to see a spectacle that triggered protests from the clergy.

Alarm about such “monstrous disrespect” was sounded at the Colored Baptist Ministers’ Conference. The New York Times headlined an article on September 11th 1906 with “Negro Ministers Act to Free the Pygmy” in a meeting with the city’s Mayor to save the young man from further degradation. Hornaday remained unapologetic, insisting that his intention of putting on the ethnological exhibit was purely scientific.

Non-Western society was an “animal” park; the social Darwinist its zookeeper. In 1916, Madison Grant published The Passing of the Great Race: Or, The Racial Basis of European History in which he expounded the theory of white superiority and argued for a strong eugenics program. That same year Ota Benga committed suicide.

Photos, from above: Philippine “Head-Hunters” on display at the 1904 World’s Fair in St Louis. provided by Jessie Tarbox Beals/Missouri Historical Society; Exposition Coloniale Internationale Paris 1931 poster; Colonial exhibition and counter-exhibition in Paris 1931; Javanese village (Kampong) at the 1889 World Exhibition in Paris; Ota Benga at the Bronx Zoo in 1906 provided by Bain News Service/Library of Congress.