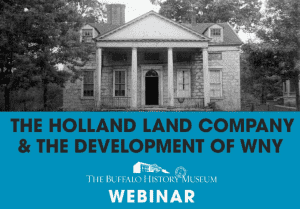 The Holland Land Company was an unincorporated syndicate of thirteen Dutch investors from Amsterdam, The Netherlands, who purchased the western two-thirds of the Phelps and Gorham Purchase in New York State and Western Pennsylvania in 1792 and 1793.

Because foreign nationals were forbidden from owning land in the new United States, the investors used surrogates who bought the land. Although they had hoped to sell the land quickly at a profit, they were instead forced to make improvements necessary to attract white settlers.  They sold the last of their land in 1840.

Ryan Duffy, Executive Director of the Holland Land Office Museum will speak on the history of the Holland Land Company and its impact on the development of Western New York in a webinar set for Wednesday, September 9th, at 6 pm, and hosted by The Buffalo History Museum,

Admission is free; pre-registration required. This webinar will be held on Zoom, to register, click here.