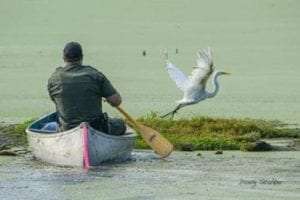 According to a press release issued by the New York State Department of Environmental Conservation, on August 24th, ECO Davey received a report of an injured Great Egret on Ooms Pond in the town of Chatham. The egret reportedly had a severely broken leg tangled in discarded fishing line.

ECO Davey formulated a plan with the help of concerned local citizens, which led to him piloting a boat toward the injured bird. After several attempts, ECO Davey managed to get a hand on the wading bird while avoiding its sharp yellow bill and returned to shore.

The Officer turned the egret over to Friends of the Feathered and Furry Wildlife Center where staff placed a brace on the bird’s leg to stabilize the fracture. The bird will undergo rehabilitation and be released back into the wild at a future date.