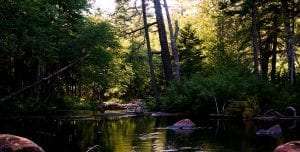 TAUNY (Traditional Arts in Upstate New York) has announced “As the Grasse Talks: A Virtual Tour of the River’s History,” a virtual tour/performance and exhibition by The Talking Wings Collective, as a part of the North Country Art, Land, and Environment Summit.

The online experience features 360-degree virtual, narrated dance performances that offer a deep and unique introduction to one of the area’s central waterways, the Grasse River, and can be found on TAUNY’s website until October 2nd.

Visitors can also stop by The TAUNY Center front display window on or before September 27th for an ongoing presentation of “Water and Origin: Protecting and Honoring the First Storyteller.” It will include a video screening and related works curated by Blake Lavia and Tzintzun Aguila-Izzo, including new creations by Mohawk ceramicist Katsitsionni Fox.

The artists featured in the virtual exhibition include the Mohawk quilter Iakonikonriiosta, Mohawk ceramicist Katsitsionni Fox, the Mazatec art/farming collective Kjoaetzen, and the dancers/filmmakers Blake Lavia and Tzintzun Aguila-Izzo, from the Talking Wings Collective. Lavia and Aguila-Izzo also serve as the exhibition’s curators. Through contemporary dance and videography, they delve into the environmental history of the Kaniatarowanénhne/St. Lawrence River Watershed on traditional Haudenosaunee territory and at the Antigua Watershed of Veracruz, Mexico, Totonac/Nahua Territory.

Blake Lavia and Tzintzun Aguilar-Izzo are founding members of the Talking Wings Collective, a group of environmental artists and filmmakers who are working on Burning or Breathing: A Series About Earth Guardians. The documentary and multimedia project follows earth guardians from across Turtle Island/North America as they create a sustainable and restorative future. The collective’s work has been previously exhibited in the MassArt Godine Family Gallery, the K&P Gallery New York, Goddard College, the Dorchester Art Project, and the Centro per l’Arte Contemporanea Luigi Pecci.

Photo from As the Grasse Talks provided by TAUNY.