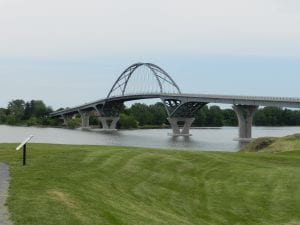 The Lake Champlain Basin Program has announced they are seeking proposals for projects that improve water quality and ecosystems in the Lake Champlain watershed. The Program anticipates awarding more than $400,000 to local organizations, municipalities, and educational institutions.

Since 1992, LCBP has awarded more than $10 million to more than 1,300 projects in New York and Vermont. Recent projects supported by the local grant program include:

· Replacement of an undersized culvert on Foster Brook in Huletts Landing, New York;
· Creation of an educational video series to increase community awareness about the impacts that stormwater runoff in northwestern Vermont;
· Construction of a rain garden to infiltrate and slow stormwater runoff from a portion of a commercial parking lot in Montpelier, Vermont;
· Employment of an Aquatic Invasive Species (AIS) Steward to work at two NYSDEC Public Boat launches in upper Saranac River basin in New York;
· Development of an immersive stewardship experience for high school students in aquatic ecology, hands-on science, and responsible recreation based in the High Peaks of the Adirondacks in New York;
· Operation of a Boat Launch Greeter and Inspection program on Lake Dunmore, Vermont.

Projects located in the New York, Québec, and Vermont portions of the Lake Champlain basin will be eligible for consideration in this grant opportunity. Grant guidelines and applications for each category can be found on the Lake Champlain Basin Program’s website. Electronic versions of proposals must be received by grants@lcbp.org no later than 4:30 pm on October 27, 2020.

The grants will support projects that advance the goals of the long-term Lake Champlain management plan Opportunities for Action. They are supported by funds awarded to the New England Interstate Water Pollution Control Commission on behalf of the Lake Champlain Basin Program by the U.S. Environmental Protection Agency and the Great Lakes Fishery Commission.