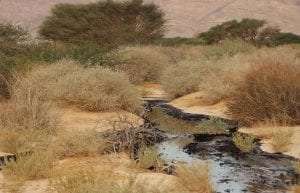 Adequate nitrogen, plenty of organic matter, a dependable rototiller and other attributes coveted by gardeners are the same things that oil-spill remediation engineers need as well. This should not come as a surprise, given that three-fourths of “soil” is “oil.”

Although bulk-storage facilities, tanker semi-trucks and train cars are occasionally the source of oil or gasoline spills, it’s surprising how often faulty home-heating oil tanks or even a leaky auto gas tank lead to significant soil and water contamination.

More than once I’ve heard grumblings to the effect that oil’s a natural product that comes out of the ground, so it may as well go right back in. Granted there’s logic to that, but with precious few exceptions, oil is found deep in the ground, in zones far removed from drinking water aquifers.

I’m no livestock expert, but I’m pretty sure “horse apples” are associated with one specific end of a horse, and you shouldn’t put these little nuggets in the opposite end. The horse analogy is coarse, but a fair one. Oil is OK under the ground, but not so much on the ground.

Dealing with contaminated water is complex and obscenely expensive. This is why it’s very important to deal with oil-soaked dirt, which can be remediated by gardening (more on that in a minute) before rain leaches dissolved-phase petroleum into groundwater.

The statement that oil and water do mix is one which might provoke some head-scratching, since we’ve always heard the opposite. Oil may not completely dissolve in water, but it does to a small degree; we’re talking in the parts-per-million range. Unfortunately, this is more than enough to make your coffee taste and smell like high-test unleaded.

In the aftermath of a big spill, petroleum-laced soil can be trucked to an incinerator or hazardous-waste landfill. Either is a costly option, but sometimes there’s little choice. For the homeowner or farmer with a modest-size spill, though, it’s possible to garden the oil away, converting toxic gasoline or diesel to water and carbon dioxide with a little help from Mother Nature.

Soil microbes drive this oil-gardening process, also known as bioremediation. While some oil vaporizes, the vast majority is broken down by native bacteria and fungi already present in the soil. They adapt to “run on oil,” eating hydrocarbons and leaving only carbon dioxide and water. While special lab-developed microbes are available, native ones do just fine.

Oxygen is also critical, because oil breaks down infinitesimally slowly under anaerobic conditions. On the other hand, well-managed “gardens” of contaminated soil can be clean in one or two years.

Organic matter greatly increases the surface area that microbes can colonize, and helps with porosity to allow oxygen in. Finally, a little nitrogen at the beginning of the process gives the microbes a boost to get going.

Because of leaching potential, eight to ten inches of affected soil is spread on roughly a foot of clean sand on heavy plastic, such as bunker-silo covering. The edges need to be raised to prevent runoff. Organic matter such as compost, manure and/ or wood chips are tilled-in at the outset, and the “garden” is rototilled several more times per season. Lab analysis, or in some cases field instruments, mark progress until petroleum is no longer detected. Then the soil can be used for any purpose so long as it stays on the owner’s property.

I should say that the New York State Department of Environmental Conservation (NYSDEC) requires all petroleum spills be reported to its 24-hour Spill Hotline at 1-800-457-7362 within two hours of discovery. Just telling you the law. Bioremediation is encouraged by the NYSDEC in many instances, and they can help monitor these “oil gardens” for free, and offer you expert advice on tending them. More information can be found on DEC’s website.

Photo of 2014 oil spill in Israels Evrona Nature Reserve provided by Society for the Protection of Nature in Israel.