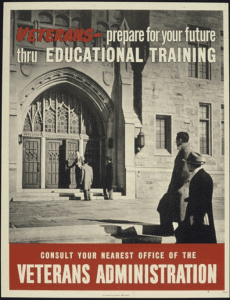 In 1868, Anthony Comstock authored a comprehensive New York State statute prohibiting the distribution of “immoral” books and images. Five years later he founded the New York Society for the Suppression of Vice.

Acting as its secretary until his death in September 1915, he sought to become the arbiter of corruption and was handed legal authority to burn indecent books, destroy printers’ stocks, and enter galleries demanding that vile paintings be removed under threat of prosecution. For his enemies Comstock symbolized licensed bigotry; for his supporters he stood firm in defense of decency.

In 1895, the New York Times introduced the term “comstockery” to describe his zealous moral campaign.

In an attempt to have the play “Mrs Warren’s Profession” stopped from being performed in New York in 1905, Comstock accused its author George Bernard Shaw of being an “Irish smut dealer.” Half a century later, muck from Dublin would smudge American audiences again. 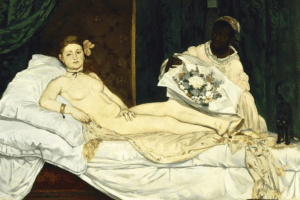 Modernist novelists have operated in the vanguard of the battle against censorship laws in Europe and America. The male authors of such heroines as Emma Bovary, Lady Chatterley, or Lolita, challenged the status quo. Enter Sebastian Dangerfield, American student at Trinity, fist-fighter, and notorious womanizer. He out-boxed and floored his vice-crusading opponents in the contest for freedom of expression.

J.P. Donleavy’s debut novel The Ginger Man was rejected by a series of respectable publishers for its salacious and sexually explicit content. Published in Paris in 1955, and after long battles with Irish, English, and American censors, the novel would eventually be praised as a modern classic, selling over forty-five million copies.

James Patrick Donleavy was born on April 23, 1926, in Brooklyn. His parents were Irish immigrants (his father from Longford and mother from Galway) who had settled in the Bronx neighborhood of Woodlawn. A rebellious youngster, James was expelled from Fordham Jesuit Preparatory.

He finished high school at Manhattan Prep, a Catholic college at Riverdale, the Bronx, ran by De La Salle Christian Brothers. He learned to box at the New York Athletics Club and declared himself an atheist. Having graduated in 1944, he gained a place at the Naval Academy at Annapolis, Maryland. At the institution’s library he developed an interest in his Irish background and became intrigued by tales and images of Dublin.

Having served in the Naval Reserve, he made use of the 1944 Servicemen’s Readjustment Act, commonly known as G.I. Bill, which provided opportunities for further education to war veterans. Failing to gain a place at any of the Ivy League Schools, he was admitted in 1946 to study microbiology at Trinity College Dublin. It would change his life.

An indifferent student, Donleavy pursued his creative interests instead whilst hanging out with a local crowd of bohemian writers and artists. Brendan Behan was one of those. Having married artist Valerie Heron, the sister of his room-mate Michael Heron, he quit Trinity in his third year, settled in Wicklow, and set up as a painter. He held a first exhibition at no 7 St Stephen’s Green, Dublin, but failed in his attempt to find a London dealer.

Hurt by this rejection, Behan proudly announced the writing of a semi-autobiographical novel that would make his name in “every nook and cranny all over the world.” Exploits of the irrepressible American charmer Sebastian Dangerfield in post-war Dublin was about to take central stage.

It is a famous story. The year was 1951. On a summer’s day, Brendan Behan decided to pay a visit to Donleavy at his Kilcoole country cottage in Wicklow. The family was out that day. Thirsty as always, Behan broke into the house, opened a bottle of whiskey, and started reading and editing an unfinished manuscript that was left on the table. 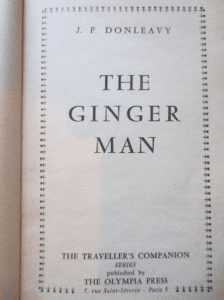 Brendan was the first person to meet the Rabelaisian figure of Sebastian Dangerfield when he read a large part of what would become The Ginger Man. Although critical of aspects of the novel, he recognized its vitality.

Behan loved its ribald sex-scenes, extra-marital affairs, heavy drinking, and bar fights. He reported back to Donleavy with the words “this book of yours is going to go around the world and beat the bejaysus out of the Bible.” With the Irish censor’s inevitable intervention in mind, he suggested the Olympia Press in Paris as a publisher.

Begun at Kilcoole, Donleavy continued the writing of his novel on the Isle of Man and in America during a year-long stay, after which the author and his wife (and young son) briefly settled in London. 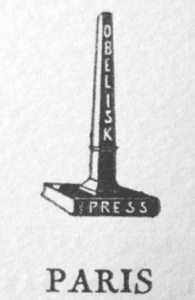 The son of Rumanian Jewish immigrants, novelist Jack Kahane was born in Manchester in 1887. When his London publisher Grant Richards went bankrupt, he established his own imprint in 1929. Having teamed up with Herbert Clarke, an English printer who owned the Imprimerie Vendôme in Paris, Kahane moved the Press across the Channel in order to escape stifling Anglo-American censorship.

The Obelisk Press took its name from the monument in the Pace the la Concorde; its phallic shape gave an indication of the company’s projected catalogue. Kahane published smut and, at the same time, sponsored novels that were considered too risky by other houses to take on, including Lawrence’s Lady Chatterley’s Lover. He also reprinted Radclyffe Hall’s lesbian novel The Well of Loneliness which had been banned in Britain since its publication by Jonathan Cape in 1928. 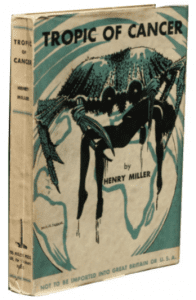 During his stay in Paris, Henry Miller’s collaboration with the Obelisk Press produced two major works. The ground-breaking Tropic of Cancer was published in 1934 after Anais Nin helped cover the costs, followed by Tropic of Capricorn in 1939. Miller found his voice in Paris.

Kahane died within days after the outbreak of war. When a Nazi bomb hit the publisher’s warehouse, it marked the end of Obelisk’s activities for several years, until Jack’s son Maurice Girodias (who used his mother’s name to hide his Jewish identity) briefly revived it in the years following German capitulation.

Flogging risqué books to American G.I.s passing through Paris, Maurice re-published Miller’s novels alongside the Memoirs of Fanny Hill, but he was unable to make the business pay. The Press was declared bankrupt in 1950. Three years later he established the Olympia Press on the Left Bank’s Rue Jacob. The name was inspired by Édouard Manet’s ‘scandalous’ portrait painting (1865) of a courtesan.

Pornographic titles were bound in distinctive green covers and issued as the Traveller’s Companion Series. Less well written erotica were given the imprint Ophelia Press Books. Covered in pink, the extensive number of titles included The Ordeals of the Rod by R. Bernhard Burns, The Whipping Club by Angela Pearson, and Book of Bawdy Ballads by Count Palmiro Vicarion.

In the summer of 1954 Girodias received a letter from an unknown author which started thus: ‘Dear Sir, I have a novel in English called Sebastian Dangerfield’. While waiting for a reply from Paris, Donleavy had started work on A Fairy Tale of New York. When a letter finally arrived, the answer was positive. Contract negotiations continued until early 1955. In a letter of 17 January that year, Donleavy proposed The Ginger Man as his preferred title.

The Olympia Press fell into financial difficulties in 1973. Girodias put the company into liquidation, intending to buy it back litigation-free at auction. On the day of the sale in Paris, his offers were opposed by a lady unknown to him. She submitted the winning bid for Olympia’s backlist of some 285 titles. The woman was actress Mary Wilson Price – Donleavy’s second wife. It was, in the words of the author, a ‘scalp in [his] belt.’ Revenge was sweet.

Brendan Behan had been partially correct about the novel’s fate. The Bible was still a best-seller, but since its publication and after long battles with various censors, The Ginger Man has never been out of print.

Illustrations, from above: A government poster informing soldiers about the G.I. Bill; Olympia, 1865 by Édouard Manet (Musée d’Orsay); The Ginger Man by J.P. Donleavy; Obelisk Press poster; Tropic of Cancer by Henry Miller; and Donleavy and Brendan Behan in 1959.