Each fall, tributaries to the Great Lakes and Lake Champlain are home to salmon returning to spawn. This can make for some exciting fish watching as salmon move upstream and jump or otherwise navigate various obstructions on their way to their desired spawning sites.

In part as a result of the New York State Department of Environmental Conservation’s efforts to reintroduce this species to its native range, New York is home to a native migratory Atlantic salmon.  Although natural reproduction has been documented, spawning runs of these fish are best found in the Salmon River flowing into Lake Ontario and the Bouquet and Saranac rivers flowing into Lake Champlain.

Coho and Chinook salmon, native to the Pacific Ocean, have also been stocked in Lake Ontario since the late 1960s. Good runs of Chinook and Coho salmon can be found in many Lake Ontario tributaries.

The New York State Department of Environmental Conservation (DEC) has announced actions underway to mitigate the impacts of low water flows along the Salmon River during the upcoming salmon run that draws thousands of anglers each year.  In addition, new angling regulations and recommendations to prevent the spread of COVID-19 remain in effect to ensure the health and safety of both natural resources and the public.

This summer, below-average precipitation has resulted in low and declining water levels in the Salmon River Reservoir. Under a federal license, Salmon River seasonal baseflows are typically increased from 185 cubic feet/second (cfs) to 335 cfs on Sept. 1, providing that water levels in the Salmon River Reservoir (SRR) are above a critical threshold.  However, the Executive Committee of the Salmon River Flow Management Team, comprised of natural resource agencies and Brookfield Renewable hydroelectric facility that regulates reservoir water levels, canceled scheduled whitewater releases over the Labor Day weekend and delayed the annual Sept. 1 increase in baseflow.

These actions are expected to conserve reservoir water to maintain suitable flows throughout the salmon spawning run. Additionally, the popular Lower Fly Fishing Section, situated just below the hatchery and typically where large numbers of salmon and anglers congregate, did not open this year, and will remain closed until further notice. 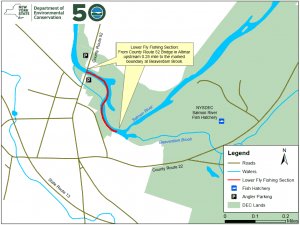 Anglers are encouraged to experience New York’s other exceptional Great Lakes tributary angling opportunities. These waters are often less crowded and offer anglers the chance to play a bigger fish in a smaller river. More information, including the I Fish NY Great Lakes Fishing Brochure, is available at DEC’s website.

DEC is also reminding anglers that several new Great Lakes tributary angling regulations became effective on April 1, 2020. The minimum size limit for rainbow trout/steelhead caught in Lake Ontario tributaries was increased from 21″ to 25″ (still 21″ in the lake). In addition, only one brown trout can now be kept as part of a Lake Ontario tributary angler’s daily creel limit of three salmon/trout in combination.

For Lake Erie, fishing is no longer prohibited from Jan. 1 through March 31 on Spooner Creek and its tributaries, and North Branch Clear Creek and its tributaries from Taylor Hollow Road upstream to the outflow of Clear Lake. For more information and exceptions, please consult the DEC Freshwater Fishing Digest or visit DEC’s Great Lakes and Tributary Regulations website.

Anglers are also encouraged to be respectful of the resource and other anglers by using ethical angling techniques. For more information on New York’s salmon species visit the DEC website.

DEC’s Salmon River Fish Hatchery is instrumental to maintaining healthy runs of salmon and trout and, normally, is a very popular destination for anglers, school groups, and other visitors. To help prevent the spread of the COVID-19 virus and to protect hatchery staff and effective hatchery operations, the Salmon River Hatchery and its grounds remains closed to visitors until further notice.