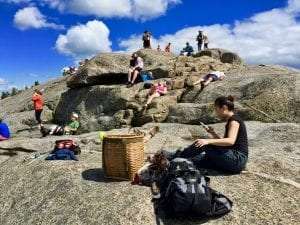 I appreciate the Adirondack Council’s recent press release TAC Press Release, Aug. 26 which highlights the many benefits of permit reservation or limited entry systems and how such a system is needed and necessary now in parts of the High Peaks Wilderness Area. Support from the Adirondack Council for such a system comes at an important moment, as overuse of the peaks continues to spike during this pandemic summer.

Adirondack Wild: Friends of the Forest Preserve has been publicly advocating for a limited entry or permit reservation pilot project in the High Peaks since we met with Department of Environmental Conservation commissioner Basil Seggos in September 2016. For the past four years we have advocated that such a system must be one part of a comprehensive management approach, including Leave No Trace education and use of many information platforms, including High Peaks social messaging to hikers and campers before they leave home.

The commissioner told us in 2016 that every management strategy was on the table, including permit reservation systems. However, he has since backed away from that position, stating earlier this year that in his view a permit or limited entry system, even one that is just a part of a broader management strategy, would be unworkable.

We respectfully disagree and now, apparently, so does the Adirondack Council. In its press release the Adirondack Council quotes Leave No Trace that “permit systems when well thought out, well designed, and soundly implemented, can serve an important function in parks and protected areas.” This paragraph is found on page 42, deep within a lengthy report on “Managing Recreation-related Impacts in the Adirondack Park and Building a Culture of Wildlands Stewardship,” Feb. 2020, prepared by Leave No Trace author Ben Lawhon.

This is the key. Permit systems must be well thought out and designed for portions of the High Peaks Wilderness. Had the DEC begun that planning and design work in 2016 – or had the department followed through on its intention to put this system in place during peak use of the High Peaks in the decade of the 1990s during which eastern High Peaks Wilderness trailhead registration grew by some 40% – we would know by now what worked, what didn’t work, and why. 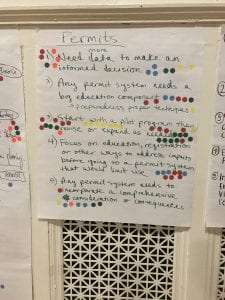 Today’s crowding, congestion and user impacts are nothing new. The 1994 draft Unit Management Plan called for a permit reservation system for the eastern High Peaks. It echoed previous recommendations by DEC in a 1978 draft UMP. By 1999, in the final and approved UMP those calls had been replaced by a 3-year study of a future, potential overnight camping permit system, followed by a commissioner’s recommendation by year 5 and an amendment to the UMP to implement it.

Despite being well understood conceptually, permits were seen then by some with DEC Ray Brook and in Albany, as the commissioner may see them now, as unnecessary, onerous, unworkable and a violation of the principle that wilderness managers should always employ the least intrusive, preferably indirect method for managing wilderness users. And that is a solid, well accepted principle.

The problem is that in other popular, heavily used and impacted Wilderness areas in the country permit systems have proven necessary, workable, usable and, while imperfect, largely successful in reducing damage to wilderness resources and assuring more people of the opportunity to experience solitude or a primitive and unconfined type of recreation.

Over 20 years, spanning 4 Governors and 6 DEC commissioners, even the limited, hesitant steps in the 1999 UMP were not taken. Commissioner Seggos hardly stands alone. His predecessors, many of them, relied upon the same DEC fallback position that “maybe in the future and only if needed” would a reservation system be implemented.

As the Adirondack Council press release makes clear, the future is now.

It is a fundamental principle of wilderness management that direct management techniques, like permit or limited entry, should be tried only after a broad range of indirect management techniques, such as education and information campaigns, are proved insufficient. As stated in the High Peaks UMP itself, ““when human use must be controlled to prevent misuse and overuse, it is best to do so by education followed by minimum degree of regulation necessary to meet management objectives. The latter option is sometimes called the minimum tool rule – application of the minimum tools, equipment, regulations, or practices that will bring the desired result.” Adirondack Wild has never disagreed.

However, this summer, like last summer, pre-pandemic and during the pandemic, evidence that the minimum tool rule is insufficient is presented right before our eyes, off State Rte. 73, on the trails, and on the summits. Indirect methods have been helpful but insufficient. Summit Stewards now are faced with the nearly impossible task of annually trying to speak to well over 30,000 people annually – or hundreds daily – about how to behave without trampling on and destroying the fragile alpine summits, not the 9,000 hikers annually they could manageably interact with in 1990.

We heartily commend the Adirondack Council for joining us to make the case that the time has come for a well thought out, well designed pilot limited entry system to be implemented in the eastern High Peaks. As quoted by the Adirondack Council, the Leave No Trace report goes on to state that a permit reservation system not only will benefit natural resources but “can benefit the natural resources and the visitor experience. Additionally, a permit system allows for an educational touch point with visitors before they depart on their trip. Many parks and protected areas have existing permit systems in place such as Great Smoky Mountains National Park.”

In the summer of 2019, DEC Region 5 and Central Office convened a High Peaks Stakeholder conference at the Keene Central School. The purpose was to focus on all management strategies and techniques, including Permits, and to hear from a wide range of folks who enjoy, recreate or benefit from the High Peaks Wilderness. What I found hopeful during the permit break-out group in late July 2019 was that DEC staff seemed highly aware of other permit systems in place or underway elsewhere in the country.

In fact, DEC staff brought up the U.S. Forest Service plan to significantly expand their pilot permit or limited entry system for the Three Sisters, Mt. Jefferson and Mt. Washington Wilderness areas of Oregon’s Cascade Range. DEC staff broached that as a possible model to follow here. I have not visited these Cascade Range but reports from there indicate the since a permit system was implemented, crowding and resource degradation due to overuse have stabilized, affording more opportunity to experience solitude and wildlife.

During the break-outs at the Keene stakeholder conference, Adirondack participants raised very legitimate questions and concerns with a permit reservation system, such as how to administer, how to plan, how to go about allocating day use or overnight quotas for a given trail network, whether a permit fee should be involved and how to hold back some permits for residents residing near the High Peaks who wish to spontaneously recreate in the High Peaks on a given day. These and many other details would be part of a “well thought-out, well-designed and soundly implemented system,” as described in the Leave No Trace report and the Adirondack Council press release.

As part of the 2019 stakeholder conference in Keene, participants were asked to rank their management strategy preferences. I was impressed with the level of interest in reservation systems and, given the problems of congestion and overuse, the degree of risk that many participants were willing to invest in a pilot program.

Eight (8) votes were cast for “any permit system needs to incorporate a comprehensive consideration of consequences.” Such consideration is necessary and prerequisite to a well thought out, well designed, and soundly implemented system. It’s time to get started.