Years earlier, Brooklyn, New York had a monkey trial – but one that was entirely different. The Brooklyn case did not involve Darwin’s theory of evolution in any way – it concerned an actual living, breathing, in-the-flesh monkey.

On a summer day in 1906, Dr. O. T. Archer, a veterinarian who worked for Frank C. Bostock, an animal trainer who presented animal shows at Dreamland on Coney Island (and at other cities in the U.S. and Europe) was carrying a pair of monkeys across the Brooklyn Bridge. Archer had just brought them from Boston, and had taken them out of the crate they’d been in, and transferred them to a bag. But Brooklyn Rapid Transit Company employees would not permit him to take them on the elevated railway into Brooklyn, so the good doctor started walking across the bridge, bag of monkeys in hand.

Both simians escaped. They were able to do so because, as Archer, an Englishman, later said “h’every monkey ’as schemes for getting h’out at times.” In this case, they had managed to make a small hole in the sack, and enlarged it till one of them could slip through it. Archer, distracted when he saw one monkey escape, set down the bag, and the second monkey also liberated himself. One monkey began climbing the bridge structure and was eventually caught by a sailor, who suffered a badly bitten finger. This monkey’s taste of freedom disrupted traffic on the bridge for about an hour, and attracted enough gawkers that police had to manage the crowd.

The other monkey, who Archer later said had been acting up that day, jumped from the bridge, splashing down in the East River. He wasn’t in the water for long, though, as a longshoreman in a passing boat scooped him up. After landing at a dock near the Roosevelt Street Ferry terminal, the man carried the monkey towards Park Row. Walking along, he encountered George Reed, owner of a Chambers Street cafe. Reed was offered a chance to purchase the monkey. Initially he turned down the offer, saying he had no use for one. But then, perhaps he fell in love with the little critter, or perhaps he realized that this could be the only chance he’d ever get to buy a monkey off the street. He forked over the man’s asking price, $2, and was happily on his way with his new primate pal.

Word of Reed’s acquisition reached Bostock (after all, you can’t keep a thing like that quiet, even in New York City), and he sent Archer to the cafe to retrieve the monkey, whose name was Dromio, but whom the press nicknamed “Steve Brodie,” after a well-known New Yorker. Steve Brodie (the man, not the monkey) had supposedly jumped from the same bridge 20 years earlier, in 1886, and lived to tell about it – and to benefit from the feat. There is substantial doubt as to whether he actually jumped or whether he was the perpetrator of a hoax. But the accomplishment of Steve Brodie (the monkey, not the man) appears to have been absolutely genuine.

The monkey’s feat might not have happened if better precautions had been taken to keep him contained. Frank Bostock (known as the “Animal King”) had been working with animals since the age of 15, when he filled in for a lion tamer injured while working at an animal show in England run by Bostock’s dad. Bostock the younger had come to the U. S. from England in the late 19th century. For years he operated Bostock’s Great Animal Arena at Coney Island, and also sometimes traveled to other cities to exhibit wild animals he had acquired. 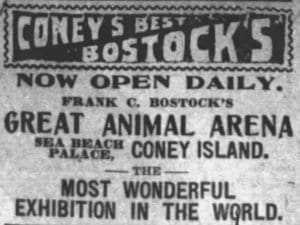 Bostock’s shows would probably not meet with approval today, since they included schlocky animal stunts such as lions riding horses and polar bears firing cannon and conducting mock battles. He also exhibited some human “oddities,” such as Chiquita, who at a height of 26 inches was billed as the “Cuban Atom” or the “Doll Lady.” Despite Bostock’s unlimited supply of showmanship, he apparently treated his animals well. The editor of his 1903 book, The Training of Wild Animals, noted that she saw no instances of animals being treated with cruelty in the weeks she spent observing Bostock’s operation.

But there were occasional problems controlling the animals. In October 1893, about six months after Bostock’s arrival in the U. S., he had several lions housed on the ground floor of a stable on East 18th Street in Manhattan. Due to a mishap, one of the lions got out of its cage and killed and started eating a horse that was also kept in the stable. It took over 24 hours before the situation could be resolved – with the assistance of lion tamers who worked for Barnum & Bailey. Bostock put considerable effort into getting the creature back into its cage safely, and accomplished this before the police could take the extreme and deadly measures they had in mind. Due to concerns for the safety and peacefulness of the neighborhood (there had been complaints by residents about the lions’ loud roaring at night), the Board of Health ordered the animals be relocated to the Central Park Menagerie.

In 1901, while exhibiting in Indianapolis, Bostock was himself ravaged by a Bengal tiger and nearly died. And problems during shows at Dreamland were not entirely rare: “From time to time his patrons were furnished with a thrill when one of his trained tigers or lions would break loose and nearly kill its keeper,” said the Brooklyn Daily Eagle at the time of Bostock’s death in 1912 (from influenza rather than any misadventure). Just weeks prior to little Steve Brodie’s high dive, a hyena bit off half of a woman’s finger when, according to her, she was jostled against its cage at Coney Island (she sued for $15,000, but a judge tossed the case two years later). 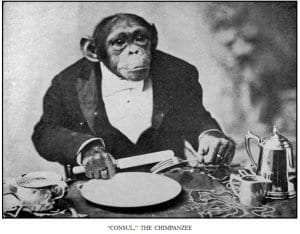 Particularly relevant to the monkey/bridge incident, was one involving Consul, a chimpanzee who was among Bostock’s collection of animals. In August 1905, Consul’s trainer failed to keep a close eye on him, and the chimp got hold of a bottle of whiskey. After he’d drunk three-quarters of it, he climbed to the roof of the arena and began howling. When some workers tried to grab him, he jumped to the ground, seized a roll of tickets from a cashier’s cage, and began tearing around as members of the public dodged out of his way. One of Bostock’s employees finally caught Consul and he was taken back to his usual spot where he would sleep it off.

Though Bostock’s big cats were probably a bigger draw than his monkeys, nevertheless he was determined to regain the bridge-jumping monkey (who from Ceylon, now Sri Lanka). In addition, a public fight over the monkey had potential publicity value, an aspect probably not lost on the showman. In fact, there was some speculation that the whole thing was a publicity stunt (a fictionalized version of the incident published in 1910 made it out to be the doings of an enterprising press agent). Similar suggestions had been made about the 1893 case of the lion who had gotten loose in the stable. Asked by reporters, Archer denied that Bostock’s press agent had any involvement (which, of course, he could be expected to do, even if he had been involved).

Bostock decided to take the matter to court, and A. V. B. Voorhees, Jr., a Brooklyn Police Court magistrate, issued a show cause order that required Reed to appear and explain why he had not returned the monkey. And the order specified he should bring the monkey with him.

In the courtroom on July 7, Reed removed Steve Brodie from the bag in which he had carried him, and little Steve soon began studying the intricate details of the American justice system. He leaped onto the judge’s desk, then hopped onto the desk of the court clerk. From there, he darted over to make the acquaintance of a probation officer who was present, and he also tried to befriend some other humans who happened to be standing about. (The monkey’s antics were related in “Monkey Made Real Fun in Voorhees’ Court,” Brooklyn Daily Eagle, July 7, 1906.)

Despite the disorder in the court, Voorhees posed some questions to Reed and Archer, but was not prepared to make a decision as to which party should prevail in the custody battle. Reed was allowed to take Steve Brodie back to his establishment, the Record Cafe in Manhattan where he had been displaying him to customers.

Though this writer was not able to locate any further accounts of judicial proceedings, the monkey was returned to Bostock before much time had passed. The reason Reed changed his mind can be surmised from this quote from an item in the Brooklyn Union on July 13, 1906: “Steve Brodie, Jr., the monkey that jumped off the Brooklyn Bridge…destroyed a large quantity of beer, liquors and glassware in the cafe of the man who secured him after the leap.” Undoubtedly Reed had discovered there is a downside to monkey-owning.

The death-defying monkey was back in Bostock’s possession by July 11, when he made an appearance (“fresh from his recent legal complications,” according to the New York Tribune) in a special show put on by Bostock to help raise funds to benefit orphans from the recent San Francisco earthquake. President Theodore Roosevelt had been invited to the event, but did not attend. Having finally reached his intended destination – Bostock’s arena – Steve drew crowds who wanted a glimpse of the bridge-jumper, and they were surprised by his small size, considering that he had made such a big leap. According to newspaper reports, the simian was not impressed with his admirers and spent most of his time grimacing at them. Perhaps he was wishing he could go for a swim.

Photos, from above: The Bostock Building at Coney Island’s Dreamland, from the 1904 book, History of Coney Island; Consul, the chimpanzee, from Bostock’s book, The Training of Wild Animals; Portrait of Frank C. Bostock, from the Brooklyn Standard Union, June 3, 1906; 1903 advertisement for Bostock’s Great Animal Arena.