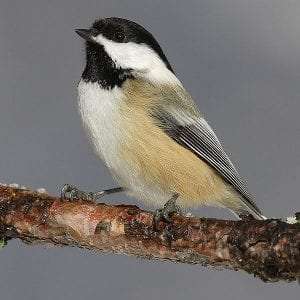 As many birds prepare to abandon their summer ranges at this time of year, others are altering their routine to allow them to better survive winter. The regular appearance of numerous, year-round avian residents around homes and camps suggests that the behaviors of these hardy species do not change from one season to another.

However, following the end of the nesting season, many of these permanent members of our wildlife community subtly change their routine to improve their chances of finding food and avoiding danger. Among the birds that experiences a shift in behavior from their nesting season to this non-breeding period is the black-capped chickadee, a friendly and perky bird that almost everyone recognizes in appearance and song.

During the breeding season, chickadees spend much time scouring the section of woods they have claimed looking for bugs. A diet high in protein is needed, especially by the female, to promote egg development, provide nourishment to the nestlings and eventually their fledglings. While some seeds are consumed during this period, these items are not as critical as during the non-breeding times of the year. In spring and early summer, prior to the young fledging, the adults tend to forage individually, but after their young develop the ability to fly, chickadees travel as a family, with the immature individuals frequently voicing their desire to be fed.

During the latter days of summer, as the fledglings gradually acquire the knack of finding food on their own, these juvenile birds begin to spend less time in the company of their parents and more time traveling outside the boundaries of their home. Since most birds of the same species often nest at the same general time in a particular region, the developing fledglings likewise simultaneously acquire the urge to wander, which occurs as breeding territories across that area dissolve, and the adults become tolerant of individuals passing through the area.

As summer comes to an end, the adults begin the process of establishing the winter flock and forming boundaries to a winter territory. Ordinarily, the 2 or 3 pairs of adults from one area gravitate together and establish a pecking order for their winter range. Periodically, changes in the forest composition caused by development, logging, or wide-spread wind damage can force an adult to abandon its former home and search for a new place to live. An adult looking to find a more favorable woodland setting may also be on the move after the end of the nesting season.

The pecking order that eventually becomes established in a winter flock can be noted when a group of chickadees arrives at a feeder. Often, one bird will land, yet will quickly yield its place to another incoming chickadee before it gets the opportunity to grab a seed. This is probably a juvenile bird, or an outside adult that is attempting to join the flock, but is at the bottom of the pecking order and must yield to any incoming member of the flock. (The chickadee is most intolerant of another invading its personal space. This usually permits only one member of the flock to occupy a feeder at any given moment.) Occasionally, one bird will land, pick up a seed and take off immediately as another approaches. This is probably a middle ranking adult yielding to the dominant individual. The alpha male or female can easily be identified by its ability to land, handle several seeds at its leisure, before finally selecting one for removal.

Along with being the most aggressive, the dominant members of the flock are the ones that have a firm knowledge of the location of the best sources of food. The subordinate birds are willing to tag along in order to be led to places in the forest where food is most prevalent. Older and more experienced birds are also better aware of where danger lurks in the general region, which helps the flock survive.

It is not uncommon for some lower position members of the flock to periodically drift away and exit the territory to join a neighboring winter flock. This is why a flock may contain a different number of individuals when they visit a feeder from one day to the next.

Winter flocks of chickadees are already forming as families are breaking up across the region. The juveniles may stay for a few days to a month learning the area before moving to a neighboring flock to see if food availability is any better on the other side of the fence.

There is still an abundance of natural foods available for these friendly birds which the older members of the flock are sure to utilize during the coming months. This is why I never put out many seeds at this time of year. However, the dynamics that causes the flock to function as a group to better deal with winter is already forming, as it won’t be long before this strategy will be needed to help survive the coming season here.