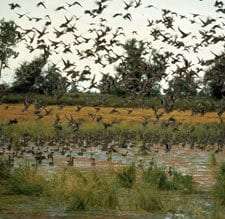 This time of year is when the foliage begins to turn and when birds are more regularly seen in flocks, rather than individually, as they perch on a wire, forage in a field or fly across a road.

The territorial nature and belligerent behavior exhibited by adults toward neighbors from early spring through the end of the breeding season now fades like the chlorophyll in leaves during the latter weeks of September. Thus, a more gregarious lifestyle develops among the members of the same species and results in the formation of flocks for resting, foraging, traveling, and roosting at night.

One reason for assembling into flocks as summer wanes is the need to foster the continued development and education of individuals born only a few months earlier. As a general rule, parents provide the young with protection and food until they are old enough to have a mastery of flight and have learned the basics of obtaining items to eat on their own. Around that point, maturing birds abandon their parent’s territory and begin to explore the surrounding environments. By becoming members of a flock, these juveniles remain in the company of numerous older, more experienced adults. In this way, they learn the places where food is plentiful and they can rest, especially at night with a minimal threat from natural enemies.

When many birds simultaneously forage in one spot, it may seem to limit the amount of food available to each individual and hinder the prospects for any bird, especially the young, to obtain enough to eat. While this may be true at most times of the year, late summer is an exception. During this harvest period, there is an especially rich abundance of food, which can adequately meet the needs of all members of a flock as they descend to eat. Even for birds with a diet high in insects and other invertebrates rather than berries and seeds, foraging in a flock during the latter weeks of summer can be a productive exercise. Late summer is when some insects cluster into swarms for mating purposes, and the population of numerous colonies of bugs, such as yellow jackets, expands rapidly near summer’s end. Should one member of a flock be successful in locating such a hoard of invertebrates, there can occasionally be enough to satisfy the appetite of dozens of other members of the flock.

In addition to providing improved access to food, living in a flock reduces the threat of attack to any particular individual. Because many sets of eyes are more effective in detecting an approaching natural enemy than one set, it is a greater challenge for a predator to successfully invade a flock than to get close to a lone bird. Also, as the birds scatter, a predator can easily become overwhelmed by the number of potential targets near it and experience difficulty focusing on a single member of the flock as numerous others travel across its field of vision.

Flying in a flock also has the advantage of creating favorable air turbulence in the flock’s desired direction of travel. As each bird flaps its wings, propelling itself forward, it produces a small, yet definite air current in the area immediately around it. When birds fly together by the dozens to hundreds, or even thousands during migration, a significant forward draft is created by the flock. Birds toward the center or rear have a much easier time maintaining the flock’s flight speed compared to those individuals near the front. Because of this, some naturalists believe that the youngest members of the flock hang back when traveling, even for short distance flights, as this position requires an expenditure of less energy.

Also, by following older individuals, young birds are able to learn the location of key feeding sites in the general area, as well as the path of migration routes.

Mid August is when sizeable flocks of blackbirds, grackles, and starlings can be seen in fields, foraging on the ground or flying over a highway en route to a nearby pasture. Geese gather into larger groups, as do gulls, crows, turkeys, swallows, and even robins. Usually it is several more weeks to another month before ducks and the loon are seen in their loosely-knit flocks, but by mid autumn, even these birds take advantage of the benefits afforded by remaining in the company of others. The change in seasons comes early in northern latitudes and at higher elevations, which can be noticed when observing the behavior of birds, and that change is already well underway.