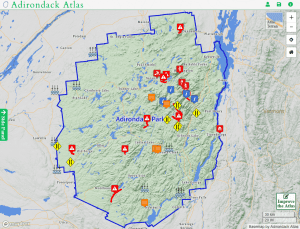 Although colder spots have been seeing nighttime temperatures in the 40s, on Wednesday much of the region reached the lower 80s, and it’s remained warm enough for comfortable camping, with water temperatures warm enough for swimming. Temperatures are forecast to remain near normal for the next week.

There is some rain and morning fog in the forecast for this weekend however, so keep an eye on the weather. Summit temperatures are expected to remain mostly in the 50s, although Sunday morning could be windy and rainy at higher elevations. Be prepared against hypothermia by bringing extra clothing, and plenty of food and water.

The recent rains have reduced abnormally dry conditions in the Southern Adirondacks, although areas at the periphery of the Adirondack Park remain dry, and some areas, including the Eastern Slopes and other parts of Southern Essex County, are still in a Moderate Drought. Wildfires, often started by an unattended camp fire, are more frequent at this time of year. Use caution with open fires.

Waters are below normal levels, even for this late in the season. Boaters should use caution and low water paddle routes are not recommended. The Hudson River at North Creek has been running below 2.5 feet on the gage. Lake Champlain, a little north of Whitehall, is at about 93 and three-quarters feet.

Water temperatures have mostly fallen into the upper 60s, some lower 60s. Mirror Lake is still about 70 degrees, as are warmer waters around the region. The water temperature at Warner Bay on Lake George, a fairly south and shallow bay, reached 75 this week. Lake Champlain is in the upper 60s.

If you’ve been holding off on that High Peaks adventure, keep at it a few more weeks. After the Columbus Day Weekend, more parking should be available, at least during the week, and the crowds will lessen.

Until then, the nice weather is going to keep pressure on the most popular areas, especially at boat launches and trailheads. Pack a mask and practice social distancing, and as always, be prepared with an alternative plan in the event parking is unavailable.

Intermittent lane and shoulder closures are underway on Route 86 between Lake Placid and Ray Brook, expect delays there.

And finally this week, hunting and trapping seasons are starting to get underway. Although accidents involving hikers are rare, be aware of the sporting seasons, wear brighter colors, stay on the trial, and keep dogs leased.

A podcast of this report can be found each week at North Country Public Radio.