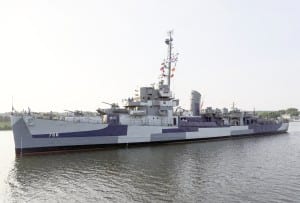 This process has been halted due to a water leak. Repairs are underway and the ship is expected to make her journey home next week.

USS Slater, the last Destroyer Escort afloat in America, is expected to depart Staten Island via tugboats on Friday, August 21 at 10:30 am for her voyage back to Albany following shipyard repairs.

The voyage is expected to take approximately 20 hours, but due to traffic on the river it is impossible to predict arrival times.

It will be possible to track USS Slater’s progress by following the tugs on www.marinetraffic.com, or the USS Slater Facebook page. Names of tugs will be released as that information becomes available. It is expected that the ship will be open to the public by August 26, 2020.

Once open, USS Slater’s hours will be Wednesday through Sunday, 10 am to 4 pm, through the end of November. The ship will be located on the Hudson River  in Downtown Albany at the intersection of Broadway and Quay Street.

More information and updates can be found on the USS Slater website.