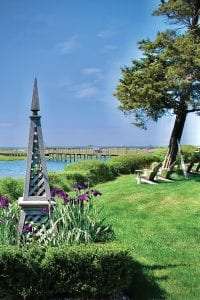 The Southampton History Museum has announced “An Outsider’s View,” a tour of Southampton and North Sea gardens and landscape settings, set for Saturday, September 12th, from 1 to 4 pm.

With designs ranging from a structured formal garden of clipped hedges and detailed gates to a waterfront cottage garden bursting with flowers and native flora, each setting will provide a look at the interplay between the landscape and the home’s architecture and history.

Tour stops will include:

In June 1897, The Southampton Press reported that Mrs. A.E. Fordham would soon move into her “pleasant new home on Hill Street.” In August, the Press noted that a carriage house and a barn were under construction on the property for Mr. Eli Fordham. In the 1970s, when the current owners purchased the house and cleared the overgrown property, they found Mr. Fordham’s barn behind a thicket of brush and trees. Since then they have completely renovated it and put it to use. Their plan for the landscape and its gardens was conceived in the 1970s and executed in stages over the next decade. The early stages established a certain formality with spaces defined by fencing, gates and clipped hedges of yew, arborvitae and privet. Along the way, they planted a large weeping beech along the front driveway and, in back, an enormous copper beech that was considerably smaller when it first arrived from Virginia. Adding to the unique character of the property are some one-of-a-kind features that the owners themselves designed and built, like the Palladian-style gates and fencing that maintains its height despite changes in grade. Today, the property consists of three separate residences that all share a common lawn and hedge, which further accentuates the grand scale of the space and its long vistas.

The Captain Daniel Halsey house was built in 1742 as both a farmhouse and part-time inn on Old Montauk Highway, where Halsey’s wife could take in lodgers to pay the bills during his long sojourns at sea. While the farmland north of the house is long since gone, the center-chimney colonial architecture and prominent street presence are reminders of the home’s origins. In the intervening years, the property served as the first retail nursery and garden design store on the South Fork. When the current owners purchased the house in 1998, the inventory left from the nursery had so overgrown the property that the structure – by then clad in green aluminum siding – was not visible from the street. A renovation preserved many elements, including the twelve-over-twelve windows and many of their original panes. Today, the house is framed by two copper beeches that survive from its nursery days; they are joined in the front yard by a 100-year old weeping hemlock and a southern magnolia planted as a 6-foot living memorial days after 9/11. The landscape is defined by yew and privet hedges, and includes a kitchen garden near the driveway. The building at the end of the driveway and facing into the rear yard is the relocated main shed built from the retail nursery. A series of less formal mixed borders connects this building to the pool and tennis court. The entire rear yard is visible from the raised terrace, which provides a bridge between the home’s functional history and its more leisurely use today.

“The Orchard” lies behind elegant gates and beyond a hedgerow that completely surrounds the grounds. Against the deep green backdrop of the privet, a classic Shingle-Style home looks out on some three acres of lush lawns punctuated with plantings carefully added over the years. Thirty-two apple trees have given the estate its name and offer a unique site for a pool, poolhouse, and gazebo. Hydrangeas bloom every summer and this year’s horticultural additions include seven transplanted hornbeams and eight crepe myrtles. Each year a different color is chosen for florals; for summer 2020, the geranium color echoes similar color accents around the property, including the pool umbrellas and pillows.

Traditionally in Southampton, the summer “camp” on the bay has been a rustic retreat — a place where local families could escape the summer hubbub of a world-class resort and find pleasure in fishing, clamming, picnicking and doing nothing at all. Originally a “kit house,” it was displayed in the 1939 World’s Fair in New York City and moved after the fair to its current location. The Camp features views of New Suffolk and Robbins Island. There was no specific landscape plan for the property, which the owners have allowed to evolve over time, taking inspiration from the gardens they have owned and others they have admired.

Port of Missing Men in the Cow Neck section of North Sea commands a site overlooking the calm waters of Scallop Pond. It was once the vacation retreat of Standard Oil heir Colonel Henry Huddleston Rogers Jr., who had architect John Russell Pope create the Colonial Revival house, taking his inspiration from the cottage built on the spot in 1661 for Captain Jackomiah Scott. The property is composed of numerous structures, including a chapel with striped doors; these colors are from the family crest and the angled-stripe style denotes a royal heraldry. All of the structures sit on a vast landscape of open fields and copses filled with native beech, locust, and cherry trees. In contrast to the Italianate mansion that Rogers built on the ocean, named “Black Point,” with its formal gardens and terraces, the Port of Missing Men was built around the things the Colonel liked to do, chief among them hunting and partying. When Rogers’s grandson, Peter Salm, inherited the estate, he became known for his stewardship of the wetlands surrounding Cow Neck. Today, the Port of Missing Men features salt marsh cordgrass, sea lavender and glasswort, as well as great blue herons, great egrets, black ducks, ospreys and all manner of water birds.

Following the tour, a Champagne Reception will be held from 4:30 to 6 pm at the Port of Missing Men.