The Time and the Valleys Museum is set to host a virtual program by Sullivan County Historian (and periodic contributor to New York Almanack) John Conway entitled The Suffragists: Fight for the Vote in Sullivan County, on Sunday, August 23rd. 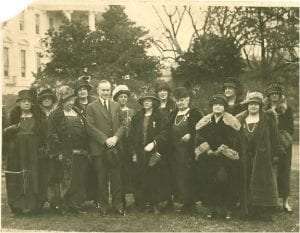 Conway will examine the strategies of the Suffrage Movement, the impact of the First World War on the movement, and some prominent local leaders, including Elizabeth Worth Muller.

2020 is the 100th Anniversary of women gaining the right two vote in the United States. Women won the right to vote after decades of struggle and against strong opposition from men – and some women – who feared that government would be placed “under petticoat rule.”

Ultimately, it was effective leadership and the development of what became known as “the winning plan” that turned the tide.

This program will begin at 2 pm. To attend, email the Museum at info@timeandthevalleysmuseum.org.

Photos, from above: Votes for Women wagon in the Catskills; and Suffragist at the White House (provided).